Antonio Méndez remembers his early days in Nosara with fondness. In 1989, when he arrived from San Ramon, “Everyone knew everyone else by name. Most of the extranjeros here had come to retire. Ticos and gringos worked and socialized together.”

Méndez began his business in Nosara by transporting and selling produce at Super La Paloma, in a very small building. “On Saturday morning the gringos came to buy fruits and vegetables – this was the farmers’ market of its day. It was a place for everyone, ticos and gringos, to chat about the news of the day and find out who was new to Nosara. In those days, this was how news was spread. We had only a few public telephones. People used to meet on weekends at Rancho Nosarita or Playa Pelada.” 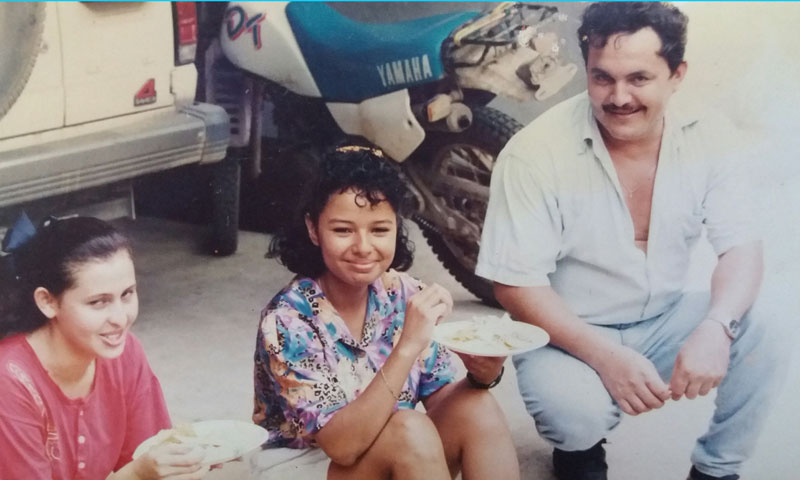 Méndez and two employees in the early days

Then with the help of his brother, he bought Super La Paloma. As more and more people moved to Nosara, the store grew to meet demand for produce, meat, and other goods. Now Super La Paloma is one of the full-service supermarkets in town. It’s a family business where his wife and children work alongside him.

He saw some setbacks. When Nosara was flooded in 1997, he said, “I was one of those directly affected, and I suffered great losses. The earthquake of 2012 destroyed most of my house and ruined a great deal of merchandise in the store. Only the roof and one of the corners of my house escaped without damage. I had a group of workers working to restore both the business and the house.”

Méndez’s involvement with Nosara went well beyond his store. To resolve the problems in those days, the community organized to get better service. The road was repaired and bridges built over rivers in Garza, Esperanza, and the Cacao quebrada with the help of the government and USAID donations.

In 1996 he was part of a group formed to find a way for students to continue studying after they finished elementary school, because many families couldn’t send them to Nicoya, the nearest high school. The group began building a high school here, and “the dream came to life at the beginning of 1997, and the Colegio de Nosara is still functioning.”

In 2002, Méndez was elected to the Nicoya Municipal Council, where he served until 2010 and was president from 2004 to 2008. During his tenure the government invested in improving the airport terminal and paving the runway. Before these improvements, on several occasions, Civil Aviation authorities had closed the airport, which caused tremendous economic and social damage by discouraging tourism. The council also negotiated with ICE to increase the electrical grid and telephone service to meet rising demand.

His experience on the council convinced him that Nosara needs its independence from Nicoya, but he added that, “Nosareños also need to take advantage of all that’s the government can give us — scholarships, assistance to families in need, and other opportunities. Everyone should take responsibility for getting what is available to them.”

He has also become an ardent environmentalist. “In 1990 when I arrived, farmers would prepare the soil by burning molasses every season. That practice is no longer in use, as people became aware of the need to protect nature.

“We have laws now, but they aren’t worth anything unless people realize that if we want to stay and see our families grow here, we have to guarantee that we treat the environment around us in a way that future generations will remember us as forward-thinking.” 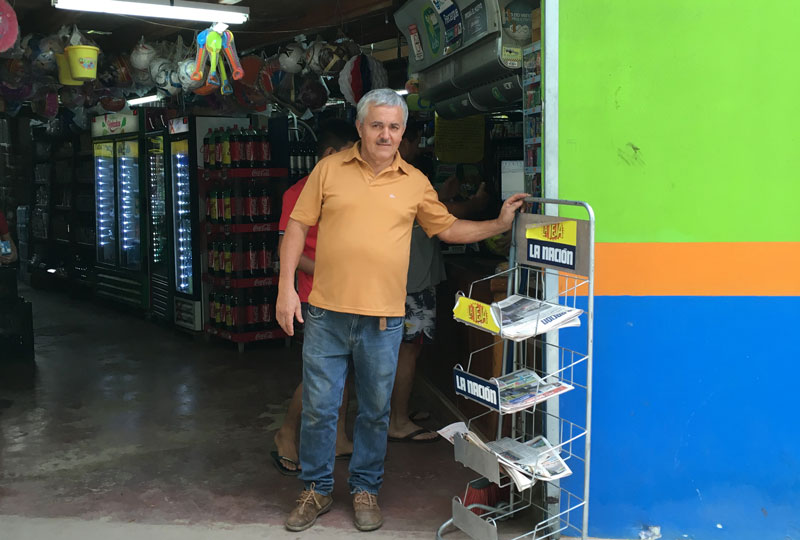 Méndez at the entrance to Super La Paloma

Méndez also envisions a project to involve people conserving natural resources. “It is alarming that there have been no projections on the impact of current and future construction on water resources, solid waste, and other environmental consequences. This lack makes it important to insist on a master plan for this area. I am not against development but it is important that new works not contaminate water sources and thus the wealth we have. The most important source of wealth is the Ostional Wildlife Refuge and the scenic beauty of Nosara, which we must maintain.”

After his time on the council Méndez continued working closely with NCA, especially when Marcel Schaerer was president, and with the Esperanza, Garza, and Nosara development associations to unite the communities.

Now, he said sadly, ticos and gringos don’t meet as naturally. The Biblioteca Kitson is a good example. In the daytime, the place is full of people, mostly tico students. But the people who come to activities and events after hours are mostly gringos, he said.

He would like to see the two cultures move closer together again. “We have people from many countries and many regions here. Why don’t we have an international food festival to bring people together?”

According to Beverly Kitson, “Antonio has been a real entrepreneur here. He has had many good ideas over the years for improving the community, and he has worked toward seeing those ideas developed. As a founding member of the library’s board of directors, he has brought us many good ideas. He is an unsung hero.”