Back to the Future in Beaches of Nosara

Back to the Future in Beaches of Nosara

More than thirty years ago, newly elected NCA President David Kitson laid out his vision for leadership in his first newsletter to NCA members:

“Playas Guiones and Pelada are true gems which must be protected at all costs. We will work both through the Costa Rican judicial system and with the governmental agencies in charge of conservation and environmental protection to assure a long-term protection plan which will allow for orderly development of tourist facilities while keeping the majority of both beaches in their natural state.”

Kitson listed four areas of immediate concern to Beaches of Nosara residents: water, electricity, roads, and security. Sound familiar? Here is what was happening in 1985:

“There is good news about utilities and roads. Our own water company is working well and in the black…the Nosara diesel electric plant of ICE is giving us reliable and inexpensive power 24 hours a day, still a pleasant novelty for us old-timers.” Kitson looked forward to ICE’s cross-country power line from Arenal to the southern Nicoya Peninsula, which would be completed in two years and would join Nosara to the national grid.

With regard to roads, Kitson wrote that the government of Costa Rica had appropriated money to begin paving the road to Samara. “This work will begin in Nicoya and work south towards us. We are working hard to get our “problem” rivers near Nosara bridged. One new bridge has been finished and 3 more bridges on the Samara road are under construction. Superhighway, here we come,” Kitson wrote optimistically.

But making Nosara easier to get to and easier to live in had, predictably, attracted unwanted attention: “Back in 1971 I could leave my house alone for months on end and not miss a can of soup or a flashlight. Those days will not return. Better communications and a larger population have brought in a few social misfits,”

In response, NCA hired three mounted guards to patrol properties daily. “These guards are critical. They keep pilferers on the run, stop the poachers who would kill our wildlife, spot any leaks in the water system, find the grass fires before they get out of hand, round up the stray cattle, and in general serve as the eyes and ears of the management team…While a fence around your property may have some value, guard service is really the most effective property protection for the Nosara environment,” Kitson concluded as he asked members to pay the yearly fee for the service, which was $40 per lot. 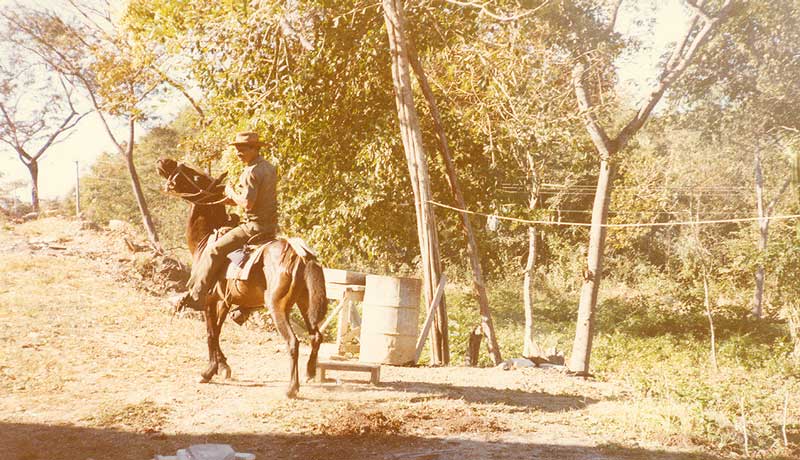 These issues have taken on new dimensions as Nosara has grown, and the community has adopted new approaches to resolving them. But NCA has kept David Kitson’s vision intact: to preserve Nosara’s special character by keeping our beaches wild and wonderful.