Translation: To arrive at the pretty little town of Nosara
And fail to eat ceviche at Arepa’s
Strikes one as odd
Because it’s known around the world.

That’s a poem written by José Lopez, otherwise known as Arepa, during a recent interview.

If you have ever been to the gasoline station, bank, or hardware store, you’ve probably seen Arepa Ceviche, a tienda consisting of a pickup truck with a large cooler on its tailgate, next to a canopy covering a table and chairs. The proprietor will likely be chatting up his customers and inviting passersby to sample his ceviche – said by some to be the best in Nosara. 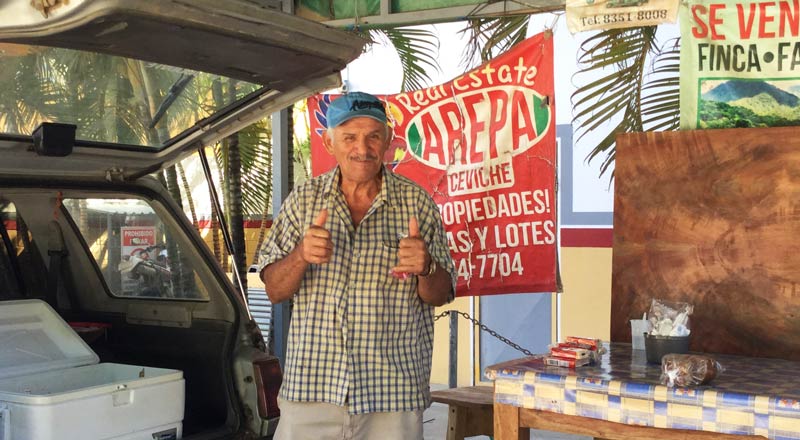 His story is “so big that it would take days to tell it to you,” says the proprietor.

Nonetheless, let us begin. “I am José Lopez, or Arepa, and I’m from Atenas de Alajuela. I’m 67 years old and I’ve lived in Nosara for 44 years.”

“When I came to Guanacaste, I saw that the traditional food was rosquillas and tanelas. In contrast, the typical food in Alajuela is arepas of flour, eggs, milk, and much more. In Flamingo, I made arepas. That’s how I came by my nickname.”

After Flamingo he moved to Tamarindo and later to Nosara. His arrival coincided with the beginning of the Beaches of Nosara project.

“I was one of the first to build houses for the foreigners moving here,” he said. He built houses for about 35 years, and then moved to Miami for four years, where he concentrated on remodeling.

Arepa also had a taxi service. Some people remember him driving around singing “Gringos locos!” from his car. Yes, that’s true, he says, “and some of them are locos! But they are also my friends.”

When he returned from Miami he retired from construction and chose instead to sell ceviche as his livelihood, using his own unique recipe. “It’s very personal. It took me a year to put the final touches on it.”

He continued: “I began selling ceviche about 8 or 9 years ago at the gas station. And now people from more than 45 countries have eaten it. So it’s world-famous.” 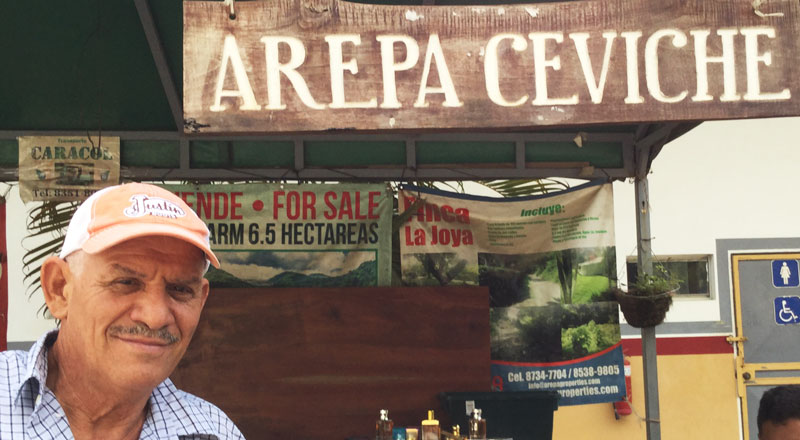 Arepa Ceviche is open from 10:30 a.m. to 5 p.m., but it you arrive at 3 it’s likely that he’ll be sold out. He advises arriving before 2. You will always have company while you eat, and you’re likely to be entertained.

Arepa likes to sing all kinds of music. And he sings well. In 2008 he won first prize on Sabado Gigante (a Miami-based variety show popular throughout Latin America), singing “Ni Se compra Ni Se Vende.” He’ll sing it to you, too, on request.

And what else? “I write poetry,” he said, pulling out a small notebook. Within five minutes, he had written two poems. One of the them “Verse,” begins this blog. The second is called “Bomba”:

The women of Nosara
When they are going to bathe
Begin by washing
Their feet – to dance!

Although he didn’t demonstrate, it’s pretty likely that he also dances. Just ask him.