Have you ever wondered who makes that unusually loud buzzing noise you hear every day? A lot more often heard than seen, male cicadas serenade Nosara from nearby forests with their strangely romantic song that female cicadas find irresistible.

Males sing by flexing their tymbals, which are drum-like organs found in their abdomen. Different species sing at different times of the day and at different times of the year, and some sing in synchronized choirs while others sing individually. In the tropical dry forest, there appears to be a peak in population density at the end of the dry season. Their emergence coincides with the breeding season of most of the resident birds and represent an important source of protein for nestlings. Magpie Jays, Mot-mots, trogons, Fly-catchers and Squirrel Cuckoos are amongst the common predators of cicadas in Nosara.

Cicadas begin their life as rice-shaped eggs in grooves made by their mothers in trees. They spend their first few days drinking the tree’s sap and afterwards crawl out of the groove and drop to the ground, where they dig to find roots to feed on. Here they spend 2-17 years (depending on the species) and emerge as nymphs that crawl up a tree and shed their exoskeletons to become adults, mate and start the cycle over again. Both nymphs and adults feed on tree sap (called xylem) through beak-like structures called rostrum. Despite their intimidating size and other-worldly appearance, cicadas are harmless to humans. 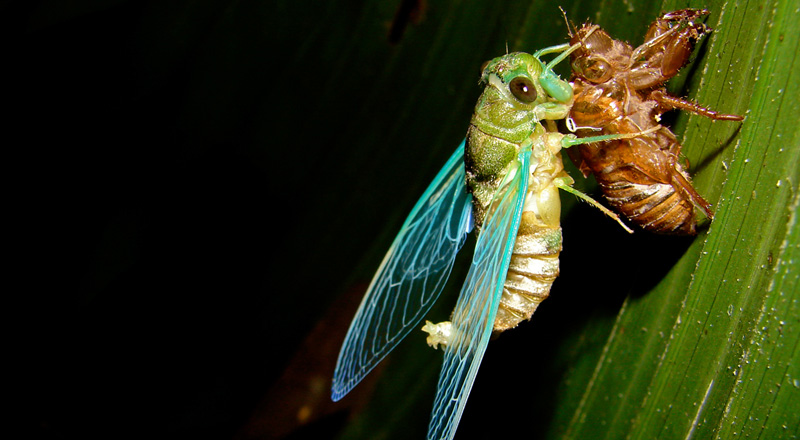 Since xylem is mostly water and some nutrients, their digestive system gets rid of water simultaneously while they drink to filter nutrients, a process that also aids in regulating their body temperature. So if you have ever wandered under a tree laden with cicadas looking for shade in the heat of the day, that fresh “mist” you might have felt was actually cicada urine! Sometimes cicadas are seen with flashy plumes protruding from their abdomen, it is actually tree resin that has crystallized as they excrete it.

There are almost 4,000 varieties (species and sub-species) around the world and found in every continent except Antartica. Costa Rica has 23 species of these splendid creatures. 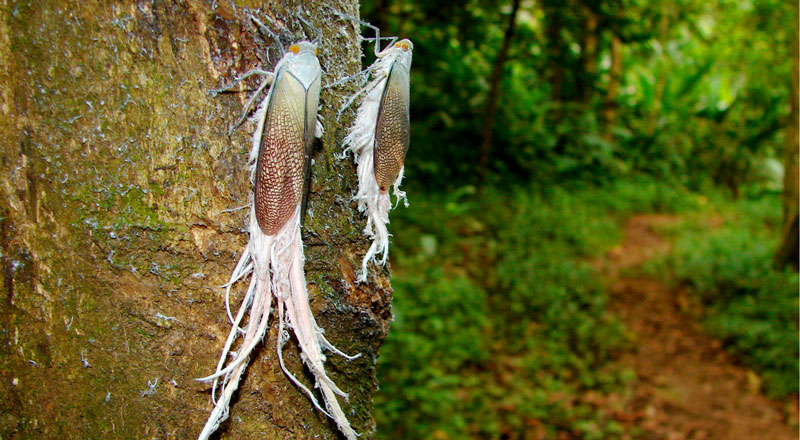 Cicadas have been present in our lives throughout history in art and literature, folklore and even food, and in some cultures represent rebirth and immortality. The constant song of the cicada is an unconscious reminder that we share our world with an extraordinary diversity of creatures that we are just beginning to understand. If you wish to learn more about these wonderful creatures and when and where is the next 17 year batch going to pop up, visit: www.cicadamania.com.