This week’s Guest Blog, by Jessica Sheffield of Nosara Recicla, first appeared in the Foro section of La Nacion on February 22. As Jessica points out, problems with trash management are not limited to Nosara! 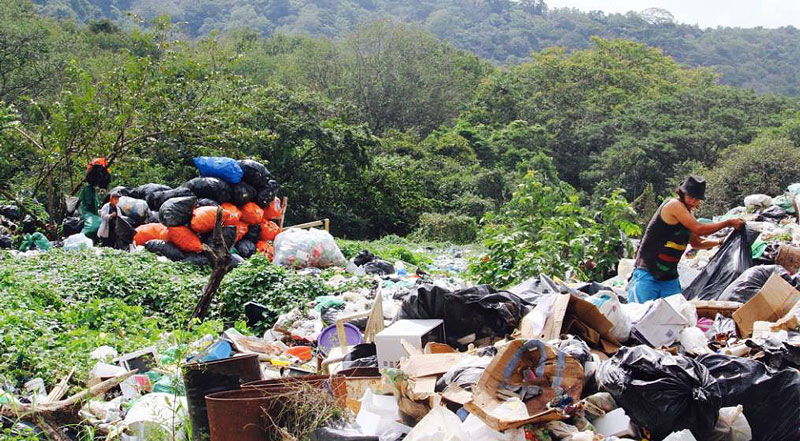 Costa Rica is known worldwide as a country that is “essentially natural” and “without artificial ingredients.” Our biological resources, protected by an extensive system that covers almost 25% of the national territory and more than 90% of our energy produced from renewable sources, has placed us among world leaders in sustainability, which in part, supports our country’s brand.

However, the lag in sustainable solid waste management has become our Achilles’ heel, drowning our communities, rivers, and seas in thousands of tons of garbage which endangers the environment, our health, and the goose with golden eggs: tourism.

In the province of Guanacaste alone, more than 122,000 people live in municipalities that do not provide garbage collection. This panorama is repeated, to a lesser or greater extent, throughout the rest of the country. Having no alternative, these families must either burn their trash, throw it into a river or a vacant lot, or take it to an open dump.

Added to this lack is Costa Rica’s negligible percentage of recycling — only 0.4% of its total waste — as well as the bad habit of littering.

The direct and indirect effects of this mismanagement of solid waste is directly impacting our water, air, and soil. Leachates from open dumps can contaminate aquifers, which supply communities fresh water, with heavy metals, nitrites and biological contaminants such as fecal coliforms and E. coli.

The surface waters of the Tárcoles and Barranca rivers, as well as other effluents in the seven provinces, carry thousands of waste materials to our beaches and seas, including a large percentage of the 130,000 kilos of plastic used in Costa Rica daily.

Air quality is affected, especially in rural areas where it is common practice to burn waste in front of homes. This activity directly affects the health of the population and indirectly affects water resources.

Recognizing Costa Rica’s problems is the first step toward finding real solutions. It is a complex task that must take into consideration municipalities’ inefficient tax collection and weak internal structures. Multisectoral cooperation could create a nationwide media campaign to raise awareness about proper waste management. [Ed. note: U.S. citizens may remember anti-littering campaigns from the 1960s, which changed the country’s habits — aided by stiff fines for litterers.]

Also essential is the political will and technical cooperation of countries to help define our country’s course and goals. Germany and Austria, for example, are years ahead of us in sustainable waste management practices,

A World Economic Forum study estimates that the oceans now hold 150 million tons of garbage. It is sad to think that Costa Rica, where we take pride in our environmental efforts, is also contributing to this phenomenon. We are polluting local rivers, lakes, air and soil. Through the ocean’s currents that can move waste thousands of kilometers from its source, we are trashing the entire world.

This year on the Norwegian coast, a beached whale was engorged with 30 plastic bags its stomach, causing it a painful agony and death. That whale is emblematic of the problem of ocean pollution.

What will Costa Rica do to solve this local problem with global consequences? It is a question not only for the central government and the municipalities, but for each one of us. We all share the responsibility of resolving this matter.