Thanks to the joint effort of the community of Nosara, the Municipality of Nicoya and, the Nosara Civic Association (NCA), the Contentious Administrative Court rejected a precautionary measure that sought to freeze the regulations for the granting of construction permits in the buffer zone of the National Wildlfe Refuge of Ostional.

This resolution supports the interest of the Municipality of Nicoya and the Nosara Civic Association, to protect the natural resource of Nosara and to seek development that goes hand in hand with nature.

On April 21, 2020, the company JBR Capital Ventures filed a lawsuit before the Contentious Administrative Court against the Municipality of Nicoya, contending that the construction regulations presented a series of irregularities. As a precautionary measure, JBR was asking the Contentious Court to suspend the application of the regulations, until the merits of the process are resolved.

Although the Court has not yet fully resolved the case, the possibility of suspending the regulations was ruled out. We share verbatim a fragment of the response issued by the court on March 22nd.

“It has been considered that the corporate interest of the plaintiff company cannot undermine the public interest implied in the protection of the species of flora and fauna of the Ostional Refuge, in this particular, the precautionary principle in environmental matters or pro-nature must be observed, to prevent the possible degradation of a biological corridor of various species of fauna.”

Why Is This Regulation Important?

After the effort of the community and the Nosara Civic Association, in February 2020, the Municipality of Nicoya approved a regulation that aims to regulate and control the granting of construction permits for those who want to build in the buffer zone of the Ostional National Wildlife Refuge.

This regulation applies to properties that are part of the buffer area. This area is delimited by SINAC and, in the case of the Ostional refuge, it is directly related to the aquifers that exist in Nosara. For this reason, a buffer area of ​​5 km was determined from the limit of the Refuge towards the mainland. Destinations such as Guiones and Pelada beaches are included within this perimeter.

The regulation establishes limits on the height of buildings, prevents building on a coverage greater than 50% of the property, requires water treatment systems and also controls lighting. All these new regulations seek to protect the impact of buildings on nature, biodiversity and aquifers. 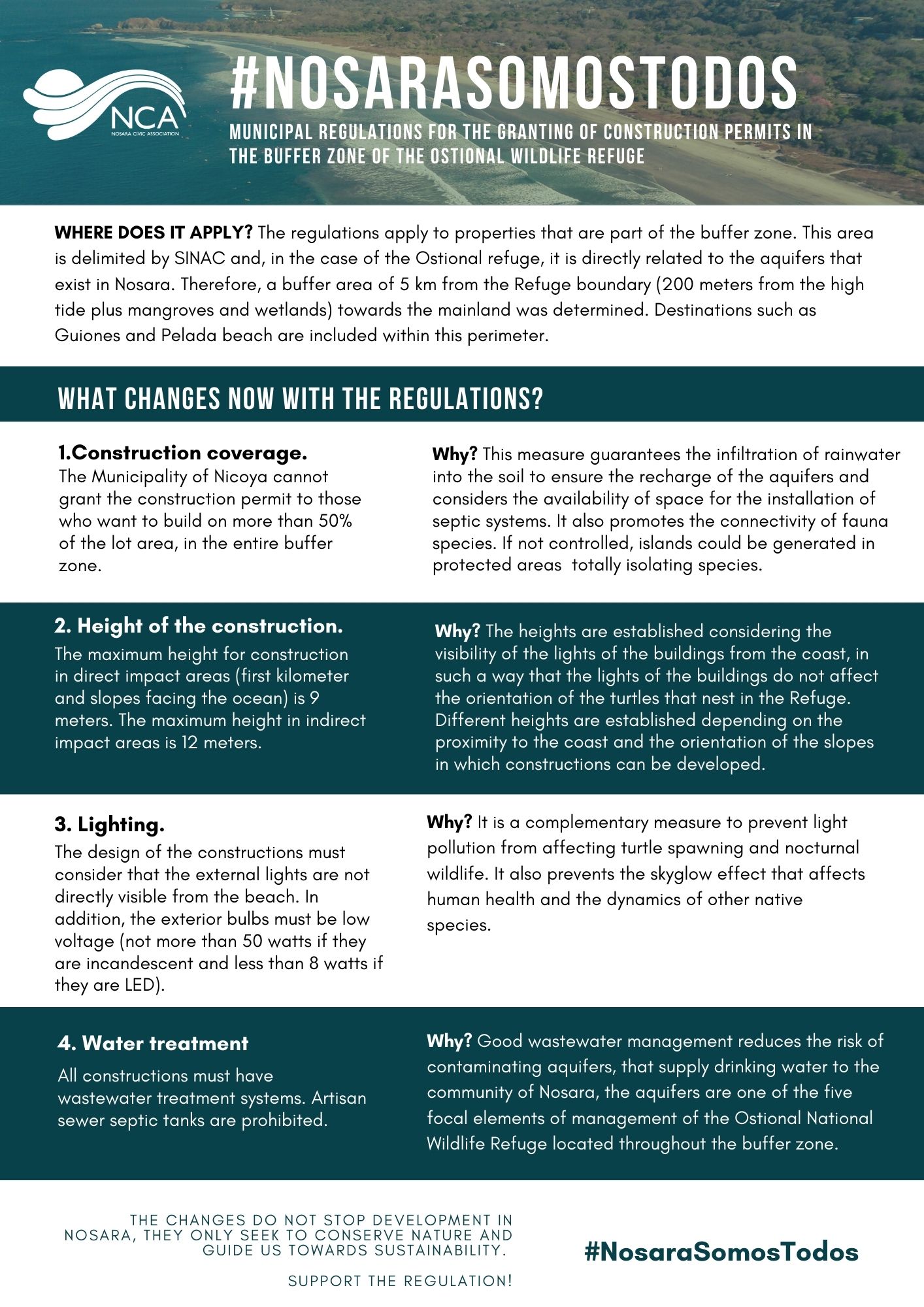 Due to the vulnerability of the Refugio, the Nosara Civic Association considered it risky that the regulation would cease to be applied and that irreversible damage would be caused while the case was being decided. That is why, in June 2020, the NCA started the #NosaraSomosTodos campaign where the Nosara community was invited to sign a petition to support the regulation and also to financially support the legal defense.

Thanks to the financial help of the members of the association and voluntary donors, the NCA is recognized in the legal process as a passive coadjuvant, to support the Municipality of Nicoya and provide the necessary inputs that validate the importance of this regulation and the risk that would be incurred if the natural heritage of Nosara is not protected.