Giving Back to Nosara, Part 2

Giving Back to Nosara, Part 2

Nosara residents are justly known for their generosity, making donations to organizations that alleviate local poverty, support education, protect wildlife, beaches, and parklands, promote recycling, and fund other causes as the need arises.

Last week’s blog featured Friends of Nosara, the mechanism created by Mike and Alice Olson to collect and distribute these donations to local partner organizations nosaracivicassociation.com/blog. Friends of Nosara is now asking donors to give through Amigos de Costa Rica, which provides the same tax-deductible advantages. For donors, there’s not much difference, but the partner organizations are becoming involved in an exciting experiment.

They’re part of the Guanacaste Community Fund (GCF), a concept new to Costa Rica. The fund is a community foundation, which according to GCF co-founder and director Steve Mack, “creates alliances and exchanges between organizations, giving them opportunities to share experiences. We actively fundraise and become involved in communities at the grass-roots level.”

Community Funds also manage Donor Advised Funds (DAFs), whereby a donor and the GCF work together to identify – or in some instance develop – projects or organizations working in areas of special interest to the donor. In the Nosara Area, DAFs have been created within the GCF by the Harmony Hotel, Blue Spirit, Susan Worth and Ed Reilly, and Wes Light and Diana Bell. “Through a community foundation, people can have a big impact on issues they care about without spending time and effort in research and follow-up. That’s what we’re here for,” Mack concludes.

In developing the fund, Mack drew on his considerable experience with philanthropy. He began working with the Costa Rica-USA Foundation (CRUSA) in 1998, when he worked on a campaign that eventually raised over $18 million for biodiversity conservation on the Osa Peninsula. In addition to his work with CRUSA, Mack also worked with several Costa Rican conservation groups as well as a stint as editor of The Tico Times.

Over the years, his interest in small, community based nonprofit organizations as a highly effective means to promote healthy economic and social development grew, as did his appreciation for Ticos’ strong spirit of volunteerism through service on school boards, churches, local government and ASADAS (community water boards).

“I spent a year and a half working with ASADAs, and was impressed with how much they can do with how little,” he says, adding that “even a small amount of money directed in the right way can have a big impact. Most of these organizations have figured out how to direct that money in the right way.”

He also saw they could use more help. In 2011, with the CRUSA board’s encouragement, he wrote a proposal for a pilot project, which became the GCF. CRUSA furnished the seed money and continued its support, which the fund supplements by raising money from other sources. CRUSA also confers tax-deductible status to donors in Costa Rica.

On his recommendation, CRUSA chose to locate the fund in Guanacaste, because of the high level of poverty and the social issues that come with it, all needing assistance at the local level. In addition, many local groups are working to combat environmental degradation and establish good water conservation practices. Guanacaste’s many expatriates are familiar with community foundations, and the large number of investors up and down the coast constitute a large pool of potential donors.

Because of its many local organizations, and because of the generosity of its residents, Nosara was the obvious choice to locate his headquarters, and he moved here in 2014 to launch the fund. It should be noted that his headquarters and his residence are one and the same. He has one full-time employee, Geraldine Carmona, who also works from her home in Santa Cruz.

“Besides grant-making and fundraising, our other purpose is strengthening community-based organizations. We’re facilitating access to public funds and cooperation agencies.” Mack says. Specifically, he has been developing region-wide collaborative projects, of which the best example is the Rio Nosara Biological Corridor initiative. Mack credits NCA as an extremely important partner, especially in the Biological Corridor. “Together with the Ostional Refuge, NCA is anchoring one end of the corridor by helping coordinate the initiative and administer the funds.” 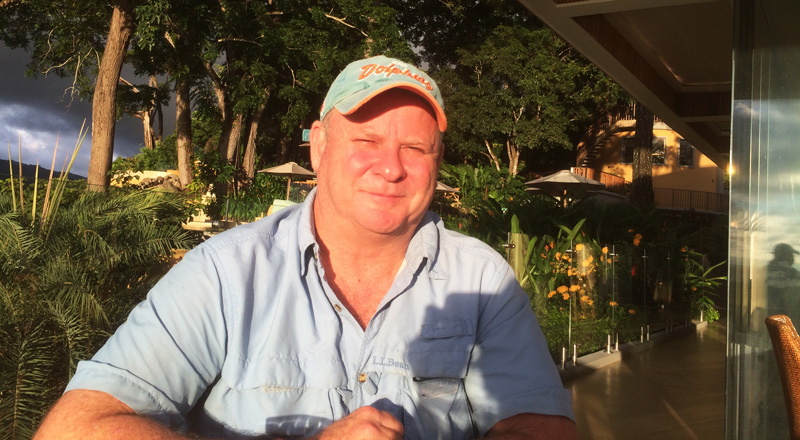 Mack is well suited to run an organization like GCF, with its bilateral roots. He was born in Honduras and spent his first eight years in Puerto Rico, when the family moved to Florida permanently. However, while in college, Mack came to Limón as a volunteer and knew he would return to Costa Rica if the opportunity arose. Shortly after passing the Florida bar, he met Costa Rican lawyers who wanted to start an NGO that would develop environmental law here.

Betting that, “it was the right idea at the right time,” he came to Costa Rica for a six-month trial period, and then stayed. During the next decade he helped establish the Centro de Derecho Ambiental y de los Recursos Naturales (CEDARENA, the Environmental and Natural Resources Law Center), and then worked in various conservation projects, writing proposals and raising money. Then CRUSA beckoned.

Now Mack welcomes the opportunity to share his experience with others interested in running similar funds. Because of GCF’s success and because the concept is still new, organizations in other parts of the country are increasingly interested in GCF’s challenges and successes.

For more information about the GCF, and to donate, go to guanacastefund.org.