Golden Memories of a Gilded Place

Golden Memories of a Gilded Place

With the recent closing for renovations of one of Nosara’s iconic hangouts, we asked Patty Yaniz for her recollections of its glory days.

The Gilded Iguana opened in the mid-1980s under the ownership of Richard Buford, around the time that Patty and Chiqui came to Nosara on their honeymoon. Like so many of us, the Yanizes kept coming back, eventually bought a lot, and moved here permanently in 1996. 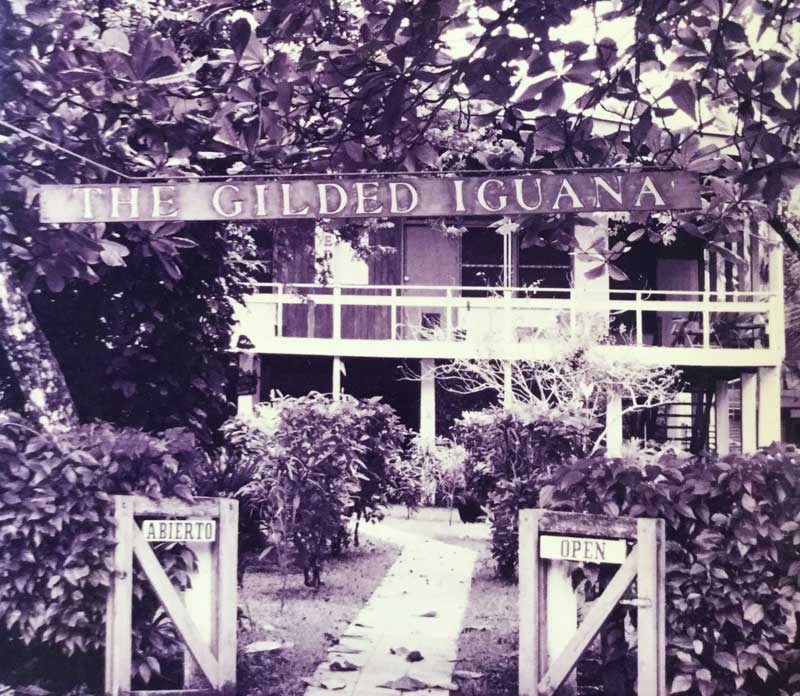 When she would hang out at the Gilded Iguana, a bridge game was among the many regular pursuits. Co-owner Jan Buford told Patty she wanted to join the game but was too busy, so Patty offered to tend bar for her. That led to a job, a natural fit given Patty’s previous life as a bartender in Key West.

Patty had run a dive boat as well, but gave it up because “it’s less stress to be a bartender,” especially if you do it well and love talking to people, as Patty does.

When Buford decided to sell, she approached Patty first. Patty and her business partners Joe Davis and Brent Steele bought the place in January 1998.

While Patty ran the restaurant, Chiqui ran a charter fishing business. He would bring in the catch in mid-morning, which meant very fresh fish was on the menu by noon. After hours, Joe Davis began his pursuit of a lifelong goal by learning to play guitar. 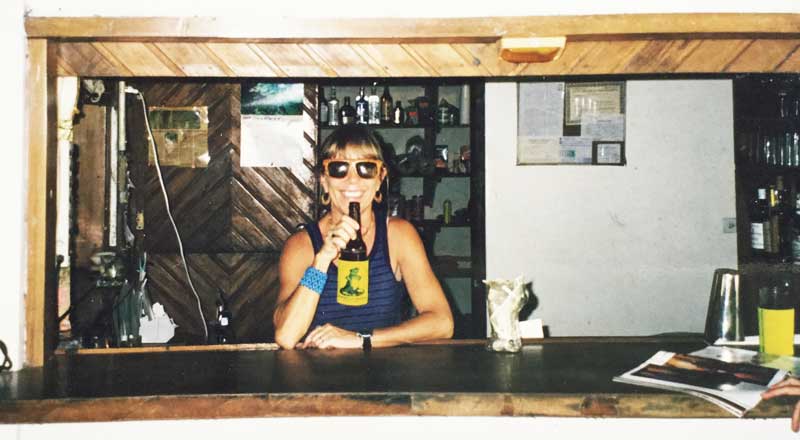 The restaurant began with lunch Monday through Friday. The menu was simple: Fish tacos, tico tacos, and Texas-style chili, in honor of Richard Buford’s home state.

Marta Montiel was the Iguana’s first employee. Patty hired her sister Yrene, whose boyfriend was a chef named Pablo Romero. When Patty hired Romero (now owner of La Buena Nota with his wife Yrene), the menu expanded and was soon available every day. Dinner and breakfast followed.

“Once we had a betting pool for the Super Bowl. A crowd gathered, but we couldn’t get the feed on our TV. Jan Buford and Judy Kinnear were in San Jose, where they could see the game. They called us every time somebody scored. So the Gilded Iguana patrons followed the game by phone.” And, presumably, drank an equal volume of beer as if they were actually watching the game.

Speaking of telephones, for a long time the Iguana was the only place in town to make a call. The phone sat on the bar, next to a timer, and callers were charged by the minute.

“All went well until I discovered that someone had called Italy without telling us,” Patty recalls. “Right about then, I saw a pay phone when I was in Nicoya. I called ICE immediately and said ‘How can we get one of those?’ We put it in the parking lot, where it remained until about 2000. Soon after that, ICE made land lines more readily available in Nosara.

Patty and Joe ran the restaurant and hotel until 2008, when they leased it to Joellen Hughes and Matt Townsend. In August 2014, the three partners sold the property to the consortium now renovating it. 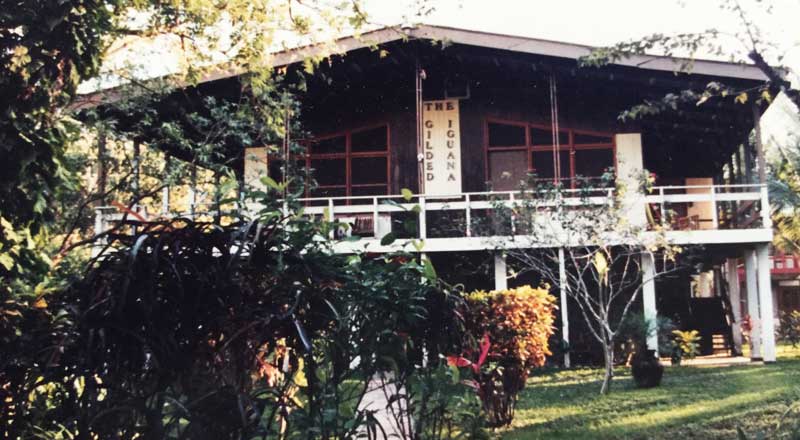 Where are the originals now? Marta Montiel works for a local property owner. Jorge Paniagua, the original bartender, is known for the empanadas he sells throughout the area every morning and at various ferias.

Brent Steele and his wife have a home here and visit frequently, returning to Indiana where he is a senator in the state legislature.

Joe Davis was honored in La Voz de Guanacaste as the founder of Nosara’s music scene, which began at the Gilded Iguana. Soon after the Iguana’s sale, he moved to San Ramon, where he continues his musical career.

Patty says she refuses job offers, but at most fundraisers you’ll find her volunteering behind the bar, where she serves up her signature cocktails and conversation.

As we look forward to the Iguana’s reopening under new ownership, we remember the old days with affection and doubtless some legendary hangovers, sore muscles and hoarse voices from those nights of music, afternoons watching football and futbol, and countless other memories. It was all worth it, wasn’t it?