In 2014 Page Sieffert realized that she was no longer hearing monkeys howling on her walks to the beach and realized that Nosara’s growth had trimmed the forest canopy. Once at the beach, she grew tired of seeing ¨a ridiculous amount¨ of trash there. One day she ran into Nosara Recicla’s Jessica Sheffield, who told her there were no funds in the budget to make the repairs needed to keep the recycling truck running.

So Page started the Nosara Challenge, based on the ALS Ice Bucket Challenge (but without the bucket or the ice). In a video posted on the Nosara Challenge Facebook page she created with the help of Yali McGregor and Kristin O’Connell, she invited three people to ¨do something¨ about Nosara’s mounting trash, dwindling canopy, or other environmental issues, and then challenge three more people.

Within three months the page had nearly 400 followers and had spun off the kind of challenges Page had envisioned. Yali and Kristin, the first two people challenged, raised enough money to pay for the recycling truck’s visits for two years. Jeff Grosshandler enlisted the help of other businesses in replacing crumbling, inadequate recycling bins at the North Guiones beach entrance with the structure that stands there today. Ru Hill installed a similar station at Baker’s Beach.

Another outgrowth of the Challenge was the No Plastics Nosara initiative, in which 14 businesses switched from selling water in plastic bottles to selling glass bottles with their logos affixed. For a one-time cost of $6, the buyer was entitled to free refills of filtered water at any of the sponsoring businesses. A portion of the profits went to local environmental groups.

The idea caught on but suffered a few setbacks that ultimately doomed it. The delivery truck was stolen, and shortly thereafter the source of the bottles dried up. And because the bottles were glass, they were heavy and they broke. The bottles are no longer for sale, but most of the business sponsors never returned to selling water in plastic bottles and now provide plastic straws to customers only on request. 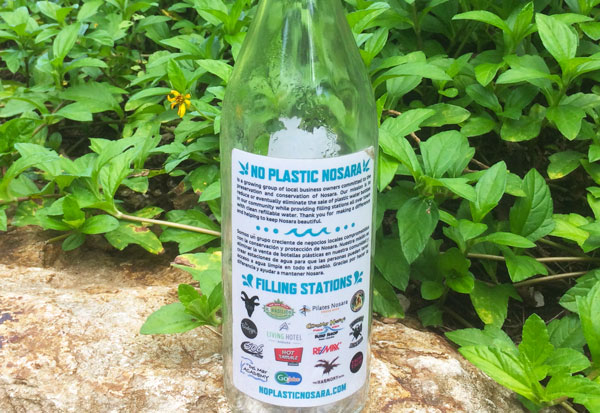 The campaign inspired more businesses to make changes. Susana Brown at Love Nosara designed and distributed cloth shopping bags with the logo Plástico No Es Chiva/Plastic Is Not Cool. Gary Edwards read about the campaign and declared that the Bodhi Tree, then under construction, would not use plastic bottles, straws, or carryout containers. Robin Lance of Robin’s Ice Cream stopped selling anything in plastic. Fritz Elmendorf of Orgánico Deli Market puts a surcharge on water sold in plastic bottles. Nosara.com sells stainless steel water bottles. The Harmony Hotel, whose staff helped start the No Plastic Nosara campaign, has pursued a low environmental footprint since its founding.

Page’s Nosara origins story is a familiar one. She came here in the early 2000s to surf, and after many return visits came back to open her Pilates business eight years ago. From the beginning, she wanted to give back to Nosara.

I thought, “How can I use my studio as a platform to educate my audience? At all my teacher trainings I give the trainees a stainless steel bottle and a reusable bag, and then talk briefly about the importance of reusing scarce resources. At one training I put up a board where people would log how many times they refilled their bottles. We saved the planet from 500 plastic water bottles that week.”

In her classes and on her website PilatesNosara.com, she sells T-shirts and donates all proceeds, as well as 10 percent of the proceeds from her mat classes, to Refuge for Wildlife. She encourages her students to visit the Refuge and to volunteer for BarriGuiones’ frequent tree plantings.

Twice a year she organizes a campaign to pick up trash on the highway from Cafe de Paris to the Esperanza School. She pushed Il Basilico to get rid of plastic — a relatively easy challenge, considering that she’s married to Alexander Cabalceta Lopez (Chandy), the owner.

Although she appears tireless, she says she gets discouraged. As more and more people come to Nosara to visit and live, “it´s harder to see the ecological core that gave us our reputation.” Many newcomers are unaware that the beaches of Nosara are part of the Ostional National Wildlife Refuge, and they know nothing about the restrictions on the beach to protect wildlife, especially nesting turtles and their hatchlings. Monkeys are still being electrocuted. People race quads, often letting their small children drive, down streets that were never meant to carry traffic at all, let alone speeders, she observes.

However, she also sees awareness growing, and still hears from people interested in the Nosara Challenge.

Maybe it’s time for another. Who wants to lead the next one?

Page has this to say about why she’s an NCA member: “The NCA is a vital part of maintaining the charm of Nosara that we all love. I feel it is my responsibility as a business owner and full time community member to support the NCA. It is in the best interest for everyone that cares about this community and the environment to support the NCA and get involved.”

If you’re not a member, please join!