How Do The Lights from Guiones and Pelada Affect the Ostional Refuge?

How Do The Lights from Guiones and Pelada Affect the Ostional Refuge?

You may ask why do people say that the lights in my house in Guiones or in Pelada can affect the sea turtles? Before answering this, we want you to see the following photograph: 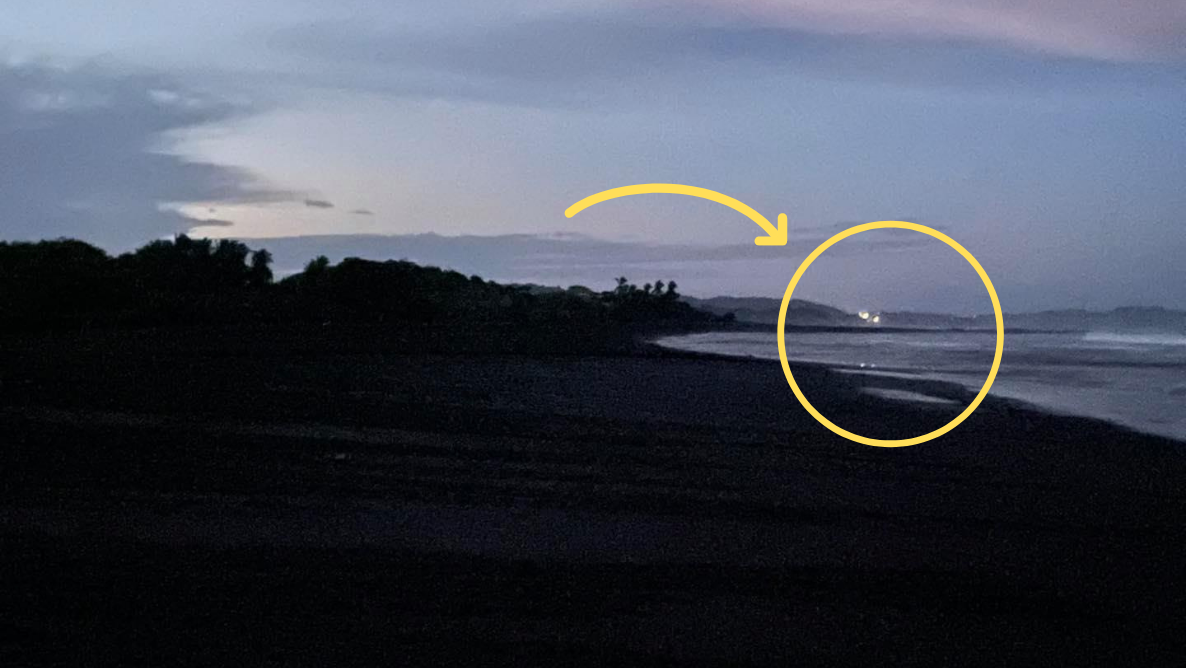 This photo was taken from Playa Ostional and was shared by the administration of the Ostional National Wildlife Refuge.  On the right side of the image you can see the lights of buildings in Playa Guiones and Pelada. This image shows the potential effect that this could have on one of the most important places in the world – due to the occurrence of the “arribada” phenomenon.

According to Yeimy Cedeño, the administrator of the Refuge, artificial lights shining on the nesting beaches of sea turtles, such as Guiones and Pelada, can have a harmful impact on the conservation of these turtles.

“If lights are not positioned properly, and lights of an adequate wavelength are not used, this can cause disorientation of the adult turtles when they come to spawn on the beaches; it can confuse the hatchlings when they surface, because they need to head towards the sea.  This would cause a decrease in spawning events,” explained Cedeño.

Lighting inhibits the entry of females that come to the beach to lay their eggs in the sand, since spawning only occurs in the light of the moon and stars.  The newborn hatchlings that leave the nest at night seek their way to the sea guided by the light of the moon; artificial lighting makes them confused and disoriented. In addition, it reduces their chances of survival due to dehydration and fatigue, while exposing them to predators and other dangers.

In February 2020, the Municipality of Nicoya approved a regulation that regulated construction in the buffer zone of the Ostional Refuge – this includes Guiones and Pelada. In said regulation, the Municipality regulated home lights, prohibiting direct lights towards the beach – so as not to disorient the turtles.

Although currently the regulation is not in force, because it is under analysis by the Contentious Administrative Court, a group of 60 Costa Rican and foreign researchers sent a letter to the Municipality of Nicoya, defending the proposed regulation, due to the impact that the lights have on sea turtles.

In the letter, the scientists refer to the study Surfing a Wave of Economic Growth by researchers Thomas McGregor of the International Monetary Fund and Samuel Wills of the University of Sydney, where Nosara was named one of the fastest growing surfing destinations in the world, compared to 5,000 other sites.

This study used the intensity of night light measured by satellites, in addition to population and urban classification data over 20 years (1992-2013). Sea turtles are sensitive to both direct light sources (artificial light that is concentrated and visible from a source) and indirect light (“sky glow” or artificial light scattered by the atmosphere and reflected back to Earth). Both types of lights can disrupt nesting behavior and disorient female and hatchling sea turtles.

The scientists explain in the chart that the brightness that occurs in the sky due to indirect light interferes with the natural lunar brightness –  which is an important visual cue for many biological rhythms. The impact is direct to the turtles, since the behavior of the “arribada” seems to follow a biological rhythm associated with lunar phases.

What Can You Do?

Although the regulations are not in force,  the Nosara Civic Association believes we can all make a change to reduce the negative impact on the “arribada” phenomenon.

First check if your home has lights that point directly to the beach or upwards. These are the most important to modify.