Let’s celebrate in Nosara the Annexation of the Partido of Nicoya!

Let’s celebrate in Nosara the Annexation of the Partido of Nicoya!

On July 25th, 1824, the map of Costa Rica changed completely. From that day our country increased in size and gained natural wealth, culture and folklore.

That day the inhabitants of the Nicoya district, which is what we now call the province of Guanacaste, decided through a voluntary act to join Costa Rica. Since then, it has been an important day for the country that must be celebrated with pride and joy.

Given that Nosara is a territory that was part of the Nicoya Partido, the Nosara Civic Association of Nosara’s work plan included support for the traditional celebration of this date, to keep the identity, culture and essence of our Guanacaste roots in force.

Thanks to teamwork with the Municipality of Nicoya and La Feria Nosara Market, on July 24th we will celebrate the Annexation of the Nicoya Partido.

How do we celebrate it?

Starting at 8 am on Saturday July 24th, at La Feria Nosara Market, we will have music with marimbas –  an instrument designated as a national symbol.

In addition, there will be sales of typical foods such as achiotada chicken, chorreadas, tortillas and donuts, among other delicacies of Guanacaste cuisine.

If you are an entrepreneur and want to sell any of your products at the fair that day, you can do so by contacting Emmanuel Gutiérrez at egutierrez@nosaracrece.com or by calling WhatsApp: +506 63918887. 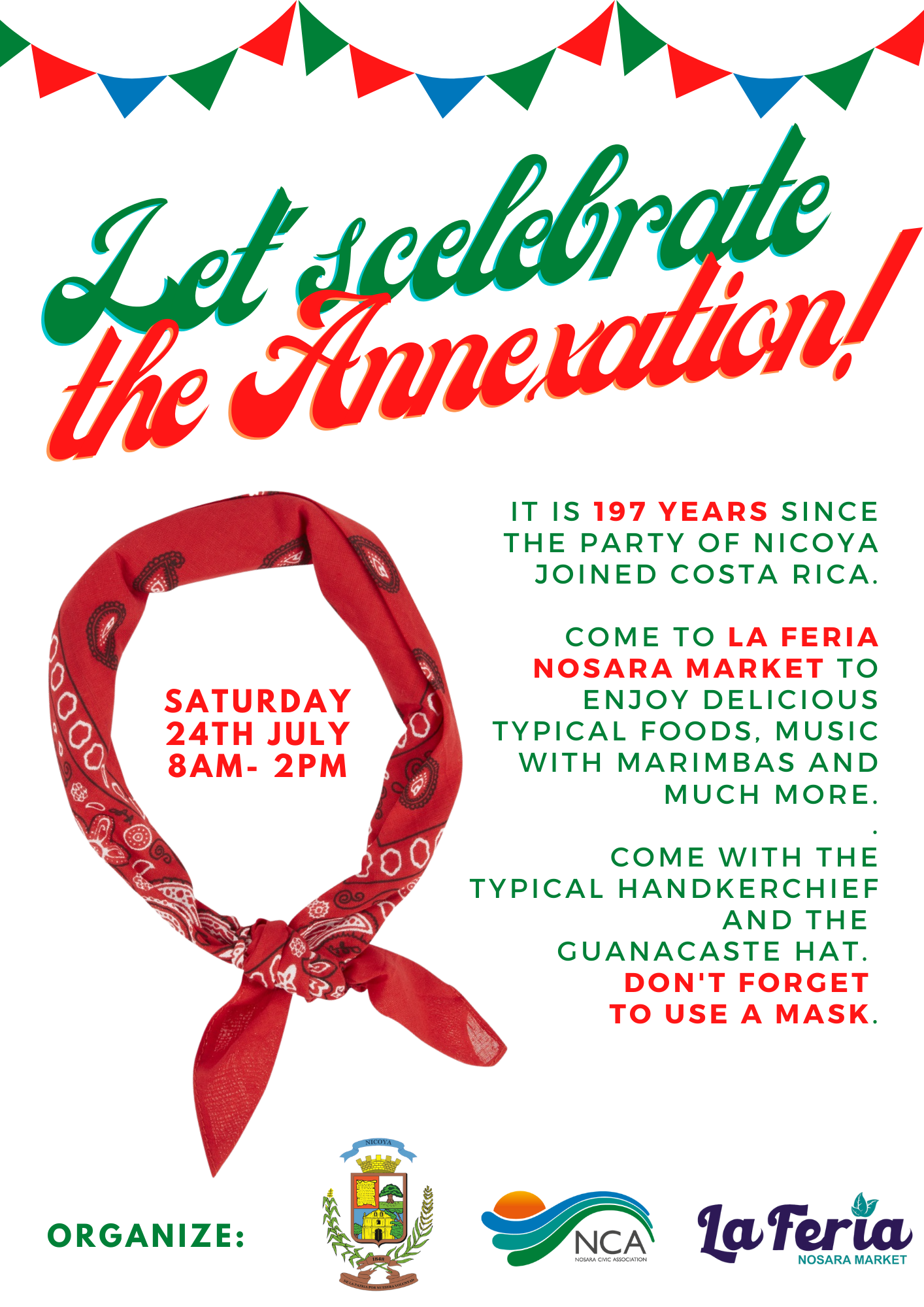 We want to encourage all neighbors and business owners to invite their friends, guests and clients to the activity. In addition, we encourage them to wear some clothing celebrating the celebration – such as typical handkerchiefs or Guanacaste hats.

The activity will have all the Health protocols; we remind you that wearing a mask will be mandatory. Upon entry, people must wash their hands and social distancing will be requested.

The story in short

If you are a foreigner and know little about the history of Costa Rica, we want to emphasize that the Annexation of the Partido of Nicoya is one of the most important celebrations in the country.

The Nicoya Party was an independent territory that reported, civilly and administratively, to the Captaincy General of Guatemala. Upon the independence of Central America from the Spanish Crown in 1821, the Nicoya Partido asked to belong to Costa Rica, due to its proximity.

Through an act of sheer will, on July 25th1824, an open town hall was held that brought together all the inhabitants of Nicoya, where they chose to belong and annex to Costa Rica.

Villa Guanacaste (what we know today as Liberia) was located in the Nicoya district and was declared the capital of the department. Later, in 1848, the Party received the title of province – but with the name of Guanacaste.

It is for this reason that the annexation refers to the union of the Guanacaste province and hence the Guanacaste shield bears the motto: “From the homeland by our will.”

From now on, every time you hear the popular phrase or see it written on T-shirts or graffiti “Guanacaste was the province that made Costa Rica great”, it will make sense.