Myriam and Marcel Say Goodbye to the Giardino

Myriam and Marcel Say Goodbye to the Giardino

Another Nosara landmark is about to change hands as Myriam and Marcel Schaerer leave the Giardino Tropicale. Thankfully, however, these two pillars of Nosara´s civic life will not be leaving town.

They arrived in 1999 with 20 boxes of belongings. ¨We rented a place in Condominios Las Palmas and started asking people for leads on jobs. Rene Spiess was about to leave his job managing Largarta Lodge, and introduced us to the owner, who hired us.¨

Both Marcel, who had sold high-end sound systems, and Myriam, who was a nurse, took to the new job immediately. ¨In medicine you spend the day seeing people with problems,¨ said Myriam. ¨In a hotel, people are on holiday, so they’re happy. It´s a pleasure to welcome them.¨

Marcel, who was Lagarta’s chef as well as its manager, said, ¨I would watch people sit solemnly until their food arrived. Then they lit up in smiles.¨

They were still working at Lagarta in 2000 when they bought the Giardino Tropicale restaurant and the 7,500 square meters on which it sits. When they began building a hotel two years later, Marcel acted as the architect, working with builder Antonio Aguilar. In August 2004, they opened the Giardino Tropicale Hotel. On July 1 they will end their time as proprietors as they complete the sale of the property. 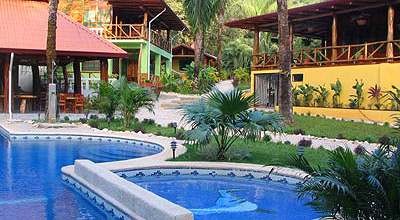 Since arriving nearly two decades ago, the Schaerers have immersed themselves in Nosara´s civic life. They would say their actions spring from a love of nature. ¨Nosara had beaches of unparalleled beauty,¨ they said, and they worked hard to preserve the area´s uniqueness. They convinced Lagarta’s owner to take the steps needed to get a certificate of sustainability from the Costa Rican Institute of Tourism (ICT). In 2001, Lagarta was the first hotel in Nosara to get that designation.

They began the Giardino with the idea of getting the same certification.¨In 2015 we achieved four leaves out of a possible five.”

In addition to the achievement that represents for a small hotel, certification was worth it for the personal satisfaction they got from educating their staff and setting a community example.

¨We did it for us,¨ said Myriam. ¨We’re doing our part against global warming.¨

For 10 years Marcel was on NCA´s Board, serving as either president or vice president.

¨We got involved in NCA when we were buying our property. I had heard of problems with double-titling, but nobody could give me a good explanation. I went to NCA to find out more and finally got an answer. It wasn´t a solution, but at least I understood the problem. Then I wanted NCA to share with other people what was going on.¨

Because the NCA is involved in services usually provided by local governments, Marcel saw his role as an advocate for cooperation among organizations such as the Nosara and Esperanza Development Associations. The table near the Giardino pool has always been a frequent site of meetings he convenes, both formal and informal, to thrash out issues and promote closer ties.

Marcel and Myriam were the moving force behind many other activities. The weekly organic farmer’s market in Giardino Tropicale’s upper parking lot, and it was their idea to organize an exposition of local crafts, which has since become a recurring crafts fair.

People had worked to establish a fire department back in 1980, but then the effort went dormant for 25 years. In 2011 Marcel helped form the Bomberos Association with the help of the Bombard family, Rene Spinnler, and local hotels. Marcel imported a fire pump and other equipment from Switzerland, paying $4,000 to transport and get it through Customs. “He also brought volunteers over to demonstrate the equipment’s use. The hoses were so powerful that it took several men to control them at first, recalls Bobbi Johnson. 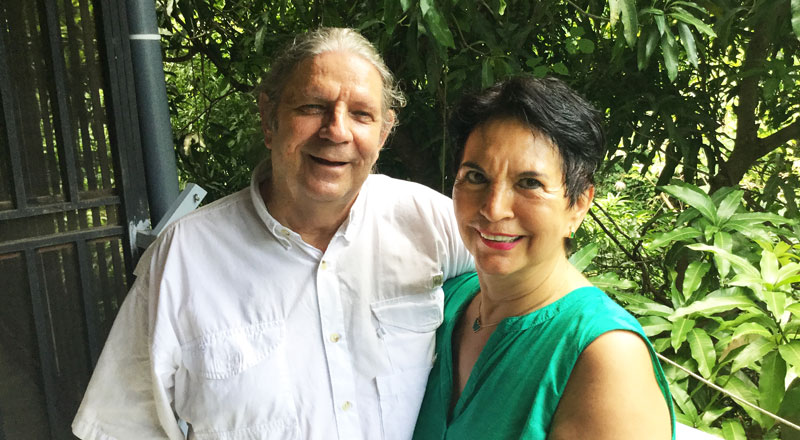 Remembering the glorious extensive trails in his native Switzerland, Marcel began improving the trails of Nosara. ¨Nature is so beautiful that we have to show it through the trails. We made the first series of extensive nature walks,” part of what is now the Senderos de Nosara, an NCA project. When Marcel left the NCA Board they named that section, which begins along the high road to the dump, the Marcel Schaerer Bioparque.

In addition to helping establish Nosara Recicla, the Schaerers also took on a corporate behemoth and won. When Coca Cola announced in 1997 that it was discontinuing bottling beverages in glass, Marcel wrote an open letter to the company about the large proportion of plastic bottles among beach trash.

¨La Nacion wouldn’t publish it as a letter or citizen editorial, so I bought space and published it as a full-page ad,¨ Marcel said. Shortly thereafter, ¨top Coca Cola executives from Costa Rica, Mexico, and Atlanta paid me a visit. We were the only hotel that didn´t sell drinks in plastic, and we were adamant that we wouldn´t change our policy for Coke. Before they left, we had convinced them to keep bottling in glass.¨

Although Marcel and Myriam are leaving the hotel business, they will continue to be involved in the issues that concern them most, such as uncontrolled building, a trash problem without a solution, and dust everywhere in the dry season. ¨We worked so hard on the roads, getting letters from doctors on how dust affects people, especially kids,¨ said Myriam. With owners of neighboring properties, the Giardino spread molasses on the main road every year to combat the problem. Now MOPT is making that measure unnecessary as it begins to pave the roads.

The Schaerers are looking forward to retirement, but leaving the Giardino will be bittersweet. ¨We made so many friends here. A small hotel is very personal. Leaving the staff and the guests is the hardest part of selling the hotel. Most of our wonderful staff has been with us for 18 years. They give us so much affection. And we´ll miss our many repeat guests. One couple came with their children every year. Now those kids are grown and bring their own families.¨

It´s highly likely that those friends will continue to seek them out, mixing their tributes with those of NCA and other Nosarans grateful for their service.