In 1992, 3.5 acres of Amigos De Nosara (later the NCA) owned land was set aside to contain the waste from the Nosara district. In the near 3 decades since ‘Nosara dump’ has been operating, it has served a vital role in helping deal with the community’s trash. This was never an easy task, particularly given the facility is a privately run organization which has received little to no help from regional authorities upon whom this task was incumbent.

The result was that these trash piles grew larger, at times, threatening to spill beyond the designated area. Fortunately, diligent efforts from the NCA and Nosara Recycling Association prevented this from occurring. Nevertheless, community trash management remains a pressing issue. 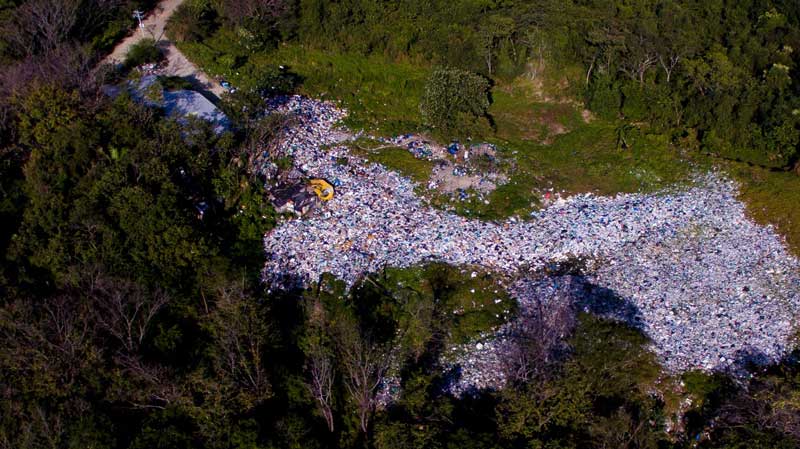 The good news is that the light at the end of the Nosara´s garbage filled tunnel seems to finally be within reach. Thanks to the combined efforts of the NCA and Recycling Association, the municipality recently began collecting the trash, paving the way for us to move forward with plans for closing the dump. After careful study, and much deliberation, the NCA has concluded the optimal way to close, clear, and begin regenerating the dump site is via one of two methods.

The first option is capping the waste. This would include redistributing some of the waste to create smooth slopes and covering all of the waste with an impermeable layer of clay and then a layer of topsoil to support vegetative growth. This is done to prevent rainwater from seeping in, and carrying toxins deeper into the soil. The costs associated with this option are dependent on the amount of cover material needed and the potential site modifications to adjust for a stormwater plan.

Costa Rica’s regulations state that once the site is capped, it needs to be fenced off, closed to the public, constantly monitored, and made unavailable for construction for at least twenty years. The NCA has considered the idea of transforming the site into a public park. However, the capping method would render this plan off-limits for the foreseeable future.

The second option is to excavate the waste and haul it to the Santa Cruz landfill. This would require removing all waste from the site, loading it into trucks for transportation and then backfilling the site with soil. The costs associated with this option are dependent on the volume of waste, the availability of soil, and the pricing of trucks and drivers. Although this option is not without its drawbacks, replacing the waste and contaminated soil with clean soil will provide a space for recreational activities, housing, or conservation. All of these options offer either economic or social benefits to Nosara.

Closing, and either covering or removing the trash from the Nosara dump was never going to be an easy task. Firstly, it comes down to money, or a lack thereof. However, even if the funds are raised to achieve this, there still exists a few complicated obstacles to be overcome.

On the surface it may appear a simple question of hauling the trash elsewhere. However, below the surface, in the literal sense, are where some of the complications lie buried. As well as an investigation into what materials may have seeped into the soil, a cost-effective plan for closure requires topographic data for the site, a total waste volume estimation, clay cover soil sources, and cost analysis of the cover or hauling plans.

Over the years, the NCA has formed positive relations with a variety of organizations who share their goal. One such group was the The University of Florida’s Environmental Engineering Sciences Department, who visited in 2012 to work on the same site. The university runs initiatives that allow students to create design plans that solve real world engineering projects, one of which is a program dedicated to capstone design, and other waste management solutions. Earlier in 2019, the NCA reached out to this department to help draft a cost effective plan to deal with Nosara’s waste crisis. Their reply was an enthusiastic “yes.”

Consequently, from the 29th of September to 3rd October, the team from Florida will be in Nosara surveying, measuring, answering questions, visiting other landfills, meeting NCA members, and working towards the creation of a cost-effective plan that advises on the best way for us to proceed. The final draft of this plan should hopefully be ready sometime in December.

Once the conclusions from this study are submitted, the NCA plans to share the findings with the community. A comittee will be formed to discuss how best to proceed, and how to raise the funds necessary to begin work. Interested parties are invited to reach out and partake in these discussions with the NCA board of directors.