Once again, the Ostional National Wildlife Refuge could be unprotected and at risk. Next Tuesday June 1st, the Contentious Administrative Court will decide whether to maintain or suspend the construction regulations that were created for the protection of sea turtles. .

The construction regulations are a municipal tool that was approved in February 2020 and its objective is to regulate and control construction permits for those who want to build in the buffer zone of the Ostional National Wildlife Refuge-, seeking a development that goes hand and hand with nature.

These regulations apply to properties that are part of the buffer area, an area delimited by SINAC. The buffer zone is directly related to the aquifers that exist in Nosara. For this reason, a buffer zone of 5 km was defined from the limit of the Refuge towards the continent. Tourist destinations with high investment appeal, such as Guiones and Pelada beaches, are included within this perimeter.

That is why the decision made by the Contentious Administrative Court is decisive. In the event that it is decided to stop the regulations, permits could be granted for the construction of towers, buildings and houses without height restrictions and increases in the percentage of the coverage of the construction area allowed.  There would also be no lighting controls and the obligation to  improve water treatment systems would be eliminated – creating a threat to sea turtles.

The Ostional Refuge is a unique place in the world. Scientific data confirm that it is the best place on the planet for the sighting of turtles. It is the second largest nesting area in the world where more turtles arrive to spawn. Without a doubt, it is a treasure for all Costa Rica.

The Nosara Civic Association will continue to defend the regulations and support the Municipality of Nicoya to protect the wildlife of the Ostional refuge and guide the development of Nosara towards sustainability.

How Did This Get to Court?

The regulations were put into effect in February 2020. On April 2st of last year, the company JBR Capital Ventures filed a lawsuit before the Contentious Administrative Court against the Municipality of Nicoya, alleging that the regulations presented a series of irregularities.

As a precautionary measure, JBR asked the Contentious Court to suspend the application of the regulations until the merits of the process were resolved.

Due to the vulnerability of the Refugio, the  Nosara Civic Association considered it risky that if the regulations were no longer in effect, irreversible damage would be caused. Thanks to the financial help of the members of the association, the NCA is paying for legal aid to contribute to the defense arguments before the Contentious Court.

What are the building regulations about and what are they for? 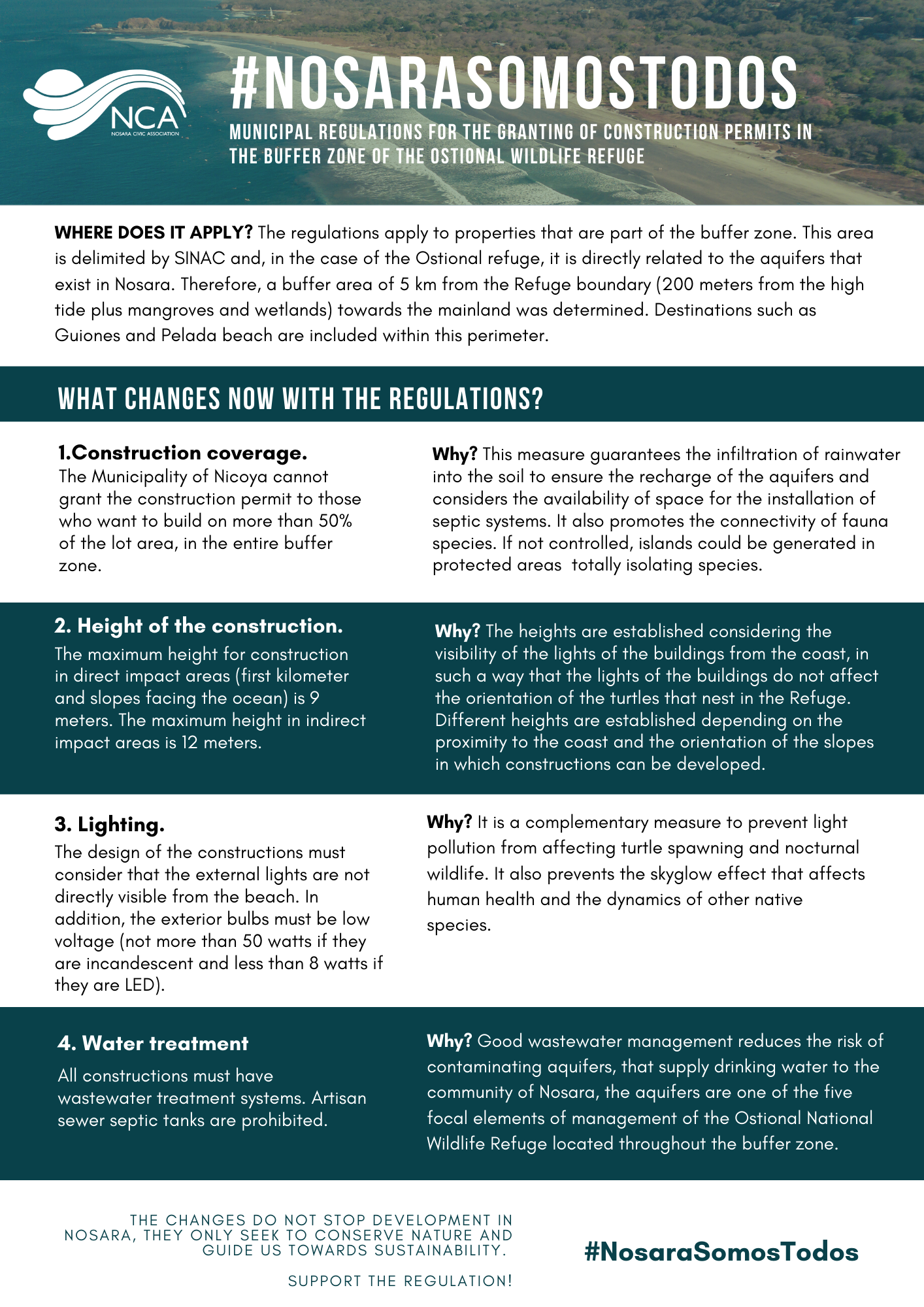