According to The Oxford Dictionary the term ‘refuge’, is: “a place offering shelter and safety from pursuit, danger or trouble.” Whether it be monkeys, pizotes, snakes, lizards, birds, butterflies, and even humans, the list of local refugees that match this criteria is extensive. However, among all creatures for whom this blessed corner of our planet provides sanctuary, there’s one that stands out.

Were it not for the ocean turtles the Nosara coastline would have fallen victim to the fate suffered by many other tourist towns in Costa Rica and around the world. It is the turtles, and those responsible for enshrining their protections into law, that prevented Nosara becoming a casualty of its own beauty.

It’s now been nearly four decades since a pioneering crew of early Guiones residents campaigned for the government to extend the Ostional Wildlife Refuge. The vast majority of current residents weren’t around during this period. Many weren’t even born. Easy then, to understand why, like most creation stories, the details of this tale fade into history, either forgotten, mis-remembered, or even ignored.

How was the Ostional Wildlife Refuge Created?

On December 15, 1981, as a precedent to the formation of the RNVS Ostional, a “protected area for the spawning and reproduction of sea turtles” was created via Executive Decree (DE) 13200-A. This maritime-terrestrial zone included coastline from the Nosara river mouth (216680 N – 352040 E) up to the Rayo river mouth (222000 N – 347670 E), as well as the territorial Pacific waters spanning these two points.

Two years later, on November 17, 1983 The RNVS Ostional was created via Law No. 6919.This incorporated two hundred meters of maritime-terrestrial zone extending from the right bank of the Nosara River mouth to Punta India.

On July 18, 1985 Executive Decree No. 16531-MAG  expanded the Refuge parameters to include land extending 200 meters from the ordinary high tide, from the left bank of the Nosara  mouth to Punta Guiones. Along with others, it was the NCA who was responsible for this. Their campaign to grant refuge status to Playa Pelada and Playa Guiones is why the area became  “a place offering shelter and safety from pursuit, danger or trouble.”

This expansion was predicated on three factors:

On October 30, 1992, the above measures were ratified via Wildlife Conservation Law, No. 7317. From thereon, everything located in the two hundred meter maritime zone spanning from Punta India to Punta Guiones was officially a part of the Ostional National Wildlife Refuge.

Finally, on September 4, 1993, in order to further galvanize sea turtle protections, Decree No. 22551-MIRENEM expanded the Refuge to include coastal waters three maritime miles offshore. These are the dimensions the Ostional Wildlife Refuge has retained until this day.

On March 3, 2016, after a long legal struggle by local communities residing within the refuge, the Legislative Assembly of Costa Rica approved Law No. 9348. This law changed the status of the Refuge from ‘state’ to ‘mixed.’ Provided residents complied, it gave them legal security, made concessions for the allowance of regulated land use, and reasonable, sustainable use of its natural resources

What are the Ostional Wildlife Refuges physical parameters? 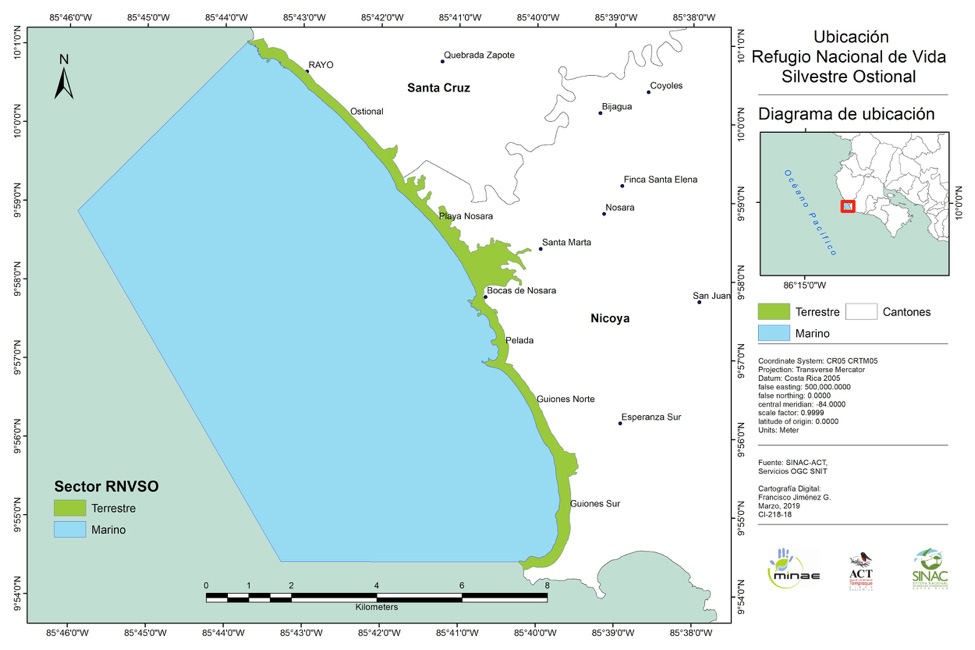 What are the current objectives of the Ostional Wildlife Refuge?

CIMACO is the local Council of the RNVSO formed in 2008, which aims to consolidate and encourage the participation of communities in the conservation, management, and sustainable use of Ostional National Wildlife Refuges natural resources. Since its creation,  The NCA has been a member of CIMACO. In this capacity, since 2016, we have worked alongside SINAC to develop a new environmental and Management Plan. This plan is currently under government review.

We believe it’s essential that people understand how and why our surroundings are the way they are. We do this by politely trying to inform all those willing to listen, in the hope that they too can understand just how precious, and fragile, the treasure on their doorstep actually is. Joining the NCA, or donating to our organization is not a business transaction. It is a connection with the local human inhabitants and the natural world they exist in.

Want to know your current location in or close to the Refuge? To check out the map created for the NCA specifically for this purpose, click this link.