The Ostional Wildlife Refuge: As Tourism Rises is it Time the Realities Fell in Line with the Rules?

The Ostional Wildlife Refuge: As Tourism Rises is it Time the Realities Fell in Line with the Rules?

At 12:01:01 am on January 1st  2020, the most obvious signal we had entered a new decade was a loud, drawn-out, firework display. Although the launch pad was North Playa Guiones, these privately funded fireworks could be seen and heard from miles away. That they were spectacular goes without saying. After all, who doesn’t love fireworks? Unfortunately, however, the shimmering New Year explosions that lit up the coastline not only flew in the face of the Ostional Wildlife Refuge guidelines but were altogether illegal.

First off, please understand that none of what you are about to read was written as a judgment piece, either on the New Years fireworks, or any other refuge infractions, such as dog walking, or beach beer-drinking, that many of even the most conscientious locals are likely guilty of. It is written to encourage a community-wide conversation regarding how the legalities concerning the refuge rules square with plain reality. The fireworks are mentioned only because they represent an obvious and recent symptom of a larger problem.

Already, some readers may be thinking, “yes, but they’re so pretty, and it’s only once a year. Can’t we just relax the rules this one time?”  And it’s right there that things get muddy. At its simplest, it’s a problem of double standards and a question of what the Ostional Wildlife Refuge truly means to us.

Whether the organizer of the fireworks was aware they were breaking the rules is unknown.  The number of tourists who understood that this event was a clear violation of refuge rules is also unknown, but it’s safe to assume the number was low.  However, it’s also a safe bet that many locals and long time residents witness to this event knew full well that such activities were in breach of refuge regulations. Judging by comments on social media, it’s also clear that many in the community were against these displays, citing the distress caused to animals both wild and domestic.

Sure, the fireworks were cool, but so is motocross, and one can only imagine the backlash if it were announced the national championships were taking place on the beach. Consequently, the question then becomes, do we enforce the rules only when it suits us, or do we make concerted efforts to inform, educate, and if necessary, take action against those who break them?  And if we decide to enforce them, whose job is to do so? Is it SINAC, the police, the local community or all of the above? We believe that the answer is ‘all of ours.’

Granted, no-one wants to be known as the nitpicking stick-in-the-mud telling others how to live. Could that be why nobody informed the fireworks organizer that despite best intentions, their actions were unacceptable? And, if building a bonfire, or drinking alcohol, or driving a vehicle, or walking one’s dog are (from a legal standpoint) as equally prohibited as firework displays, then do we adopt the same approach to these activities, regardless of their varying severity? If driving a motorized vehicle on the beach, or drinking alcohol on the beach is a clear  (if yet seldom punished) violation of state law (which it is), then assumedly this is an issue for the police? Maybe, but if the police simply don’t have the resources to pursue likely hundreds of violations per single sunset, then whose responsibility is it? The answer is again ‘all of ours.’

Time and time again, local individuals and institutions including the NCA and SINAC have paid lip service to the idea that Nosara should be a role model in sustainability. But how is that possible when it seems none of the Ostional Wildlife Refuge rules, from the minor to the major, be that fireworks, dogs, bonfires, alcohol or vehicles, are enforced? The list goes on. Again, this was not written as a judgment piece on the many activities that take place on a daily basis that transgress state and refuge regulations. The fact is, there is no clear solution to this problem, other than it seems for everyone to respect the refuge and recognize its crucial role in shaping and maintaining the place we know and love.

It’s vital that we all understand the collective, individual, and shared responsibility we all carry in protecting the incredible nature around us. Sure, it’s tricky but if as a community we put our heads together, then maybe we can achieve it. In doing so, we help to ensure the refuge – that truly special area responsible for Nosara’s uniqueness, manages to stay that way. In the meantime, maybe we can lead by individual example; start walking our dogs on the NCA trails instead of the beach, and politely reminding  would-be bonfire starters that such activities are prohibited. Finally, we should reiterate, we wrote this if anything, to serve as a catalyst to a conversation, to facilitate wider discussion on the matter in the hope that the community can collectively forge a strategy for moving ahead.

As always, the Nosara Civic Association welcomes any and all constructive suggestions.

NOTE: The Ostional National Wildlife Refuge protects and includes the beaches of: Ostional, Nosara, Pelada and Guiones. Below is the list of regulations that visitors must follow. 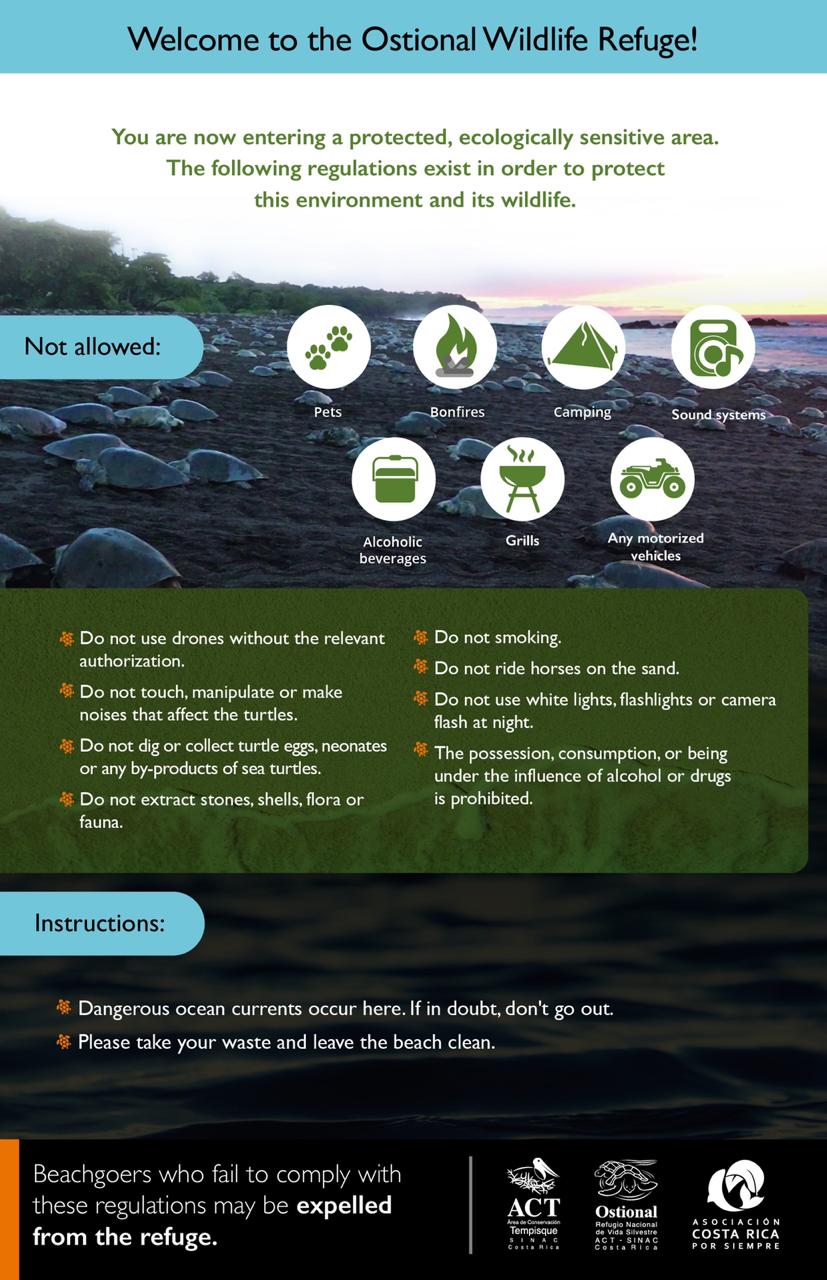