Another Nosara landmark is undergoing a transition, as the owner of the second hotel in Pelada departs. Before she left, former owner Ruth Luescher shared some memories with us.

Nearly 30 years ago Ruth and René Spinnler set off on an adventure. After working for nearly three decades in their native Switzerland, they wanted a change that would reflect their love of travel.

They visited Nosara in 1985 and built a house in 1987. In 1990 they moved here permanently with plans to start a small hotel that would welcome guests from the countries they had traveled to.

The enterprise involved on-the-job training. Even with no experience relevant to hotel management — Ruth was a research biologist, René a graphic artist — they tackled the tasks enthusiastically. “I knew no Spanish. I learned everything here,” Ruth said.

In six weeks they had built two bungalow cabins and opened Rancho Suizo. It was the second hotel in Playa Pelada. They built everything by hand, literally.

“There was no electricity when we arrived, no road, and no machinery.” They knew little about construction, or about the country they had decided to settle in. René learned more as he worked for Jim Rodengen.

In 1991 they opened a restaurant. Ruth was the chef, preparing the meals in her own small kitchen. It was the third restaurant in Playa Pelada and one of the few in the Nosara district. “People came over from Guiones, even from Ostional. Sometimes I had to cook 30 dinners a night. Too much!” The first meal cost 480 colones –not too much, even in 1990 prices.

They continued to make improvements. They replaced a pedestrian bridge with one that allowed cars to traverse the ditch into the parking lot. “We brought the electricity ourselves from the road, in 1993. It was to have been a dedicated line, but ICE changed its mind.”

They bought more land, acquiring almost 6,000 square meters, and built more bungalows, along with a swimming pool, cabañas, and bar and grill. They stopped at 11 bungalows. “We wanted to keep everything close to nature. More would have been too much.” 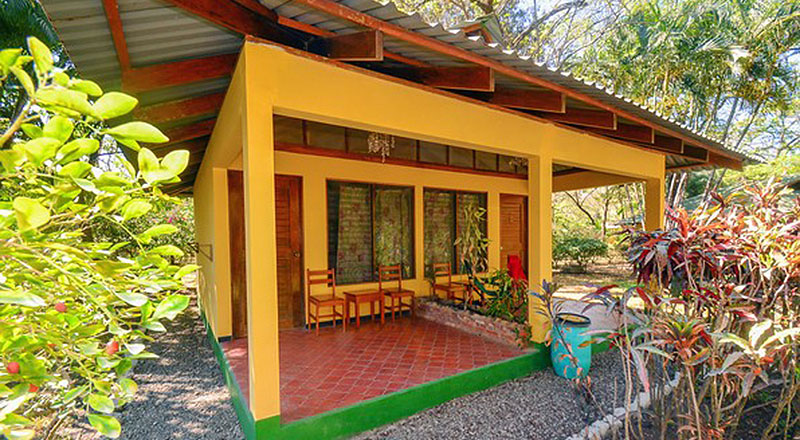 Before the first telephone arrived in 1997 they depended on their Swiss travel agency to notify them of potential bookings. Their agent would send a fax to the Nicoya Post Office, which would put it on the bus to Nosara.

“I called from one of the telephones in town to see if there was a fax, and if so I would meet the bus and send a return fax. It took 90 hours to complete a booking.”

Ruth’s favorite memory is the first time she saw turtles at Ostional. “In the early morning, we saw babies coming out of the sand. We tried to save them from the birds by carrying them to the ocean,” she said. “Now we know better.”

Although she may not have helped those baby turtles, she dedicated herself to tending to wildlife. Over the years Rancho Suizo has had macaws, toucans, Amazon parrots, a cockatoo, and Greek land turtles in residence. A large birdcage houses many of these birds, along with smaller cages for birds recovering from injuries.

They bred scarlet macaws, transferring them after six months to the Macaw Sanctuary (Santuario de Lapas NATUWA) in Punta Arenas. They bred seven in all but lost two young ones who fell to their death during the 2012 earthquake. 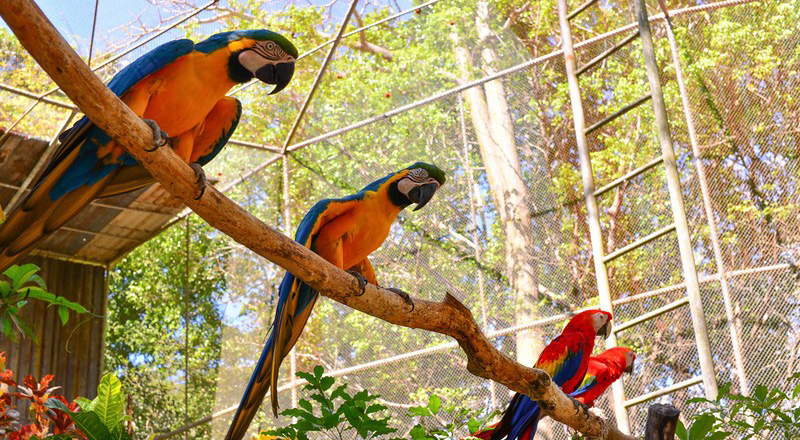 She also rescued twelve kittens, six baby pizotes, five puppies, and a squirrel. A pelican with a broken leg lived in a pool on the property, living for three months on fish brought from the river by guests until it could fly away. When she found injured monkeys, she called Brenda Bombard.

Early on, Rene was traveling when Ruth awoke to find that a boa constrictor had eaten the cockatoo. When it came after the macaw, “I pulled the macaw away from the boa, which then started in on me! It was choking me, but I was able to reach a wire and wind it around the snake’s body,” exerting enough pressure to stop it. She found a big box to hold the snake, weighed the top with stones, and waited for her groundskeeper to arrive the next morning and take the boa far away. She continued to catch and release boas, but only after buying a snake-catching tool.

Last September 26, as they were reviewing their afternoon chores, René had a fatal heart attack. After 46 years together, she found herself alone and overwhelmed with work. “I worked 16 hours a day. I did everything – cooking, cleaning, booking, etc.” So she was pleased when the hotel sold. The new owner has promised to preserve the natural setting that Ruth and René worked so hard to establish

On March 14, Ruth Luescher left Nosara. She’s headed for Switzerland and family for a while, but said she expects to move again to a sunny Spanish-speaking country. “I’m sad to leave these natural surroundings, this climate, my friends. I made everything here with my heart,” Ruth said.

She hopes to return for a visit to Nosara. Meanwhile, “Tell everybody goodbye.”