On July 2, Ramón Navarro paid a visit to Guiones for a screening of “Son of a Fisherman,” a stunningly filmed 30-minute documentary video about his life and work. “In addition to being one of the world’s most accomplished big-wave surfers, Navarro is a great proponent of and fighter for coastal conservation,” Costas Verdes project director Gerardo Bolaños said in introducing the video.

Navarro’s life, Bolaños said, is “simply incredible,” as the films bears out. Born into a family of fishermen in Pichilemu, a centuries-old Chilean fishing village, Navarro learned by example from his family how to live in harmony with the ocean. As he grew Navarro fished with his father while also teaching himself to surf at Punta de Lobos, his village “front yard,” using wooden boards discarded by visiting surfers. 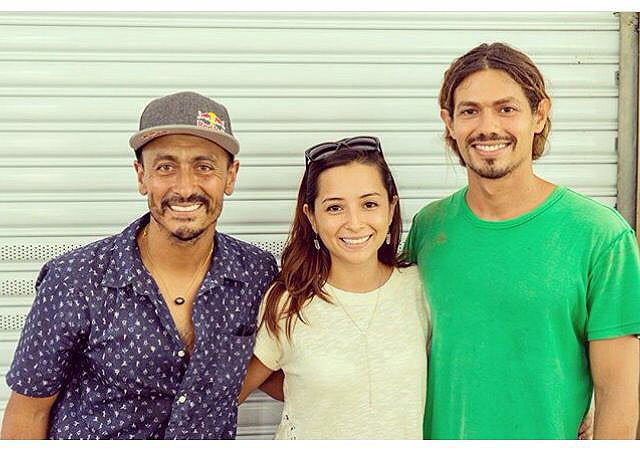 Ramón Navarro at the video screening in Guiones. Also pictured are Adrianna Gonzalez and Gerardo Bolaños, who arranged for Navarro’s visit.

He later traveled to Hawaii, arriving with neither surfboard nor money enough to support a surfing life. Nonetheless, with the help of professional surfers he mastered the waves at Waimea. He became one of the best big-wave surfers there and gained worldwide fame when he won the best ride award at the prestigious Eddie Aikau Invitational.

Back in Chile, residential and industrial developers had been moving into Pichilemu and Punta de Lobos. New businesses dangled the promise of economic growth, but Navarro doubted that the benefits of this growth would extend to the fragile coastal environment.

“I have a responsibility to give back to the place that gave me a start,” Navarro said. “If we don’t do something we’re going to lose this coast,” leading him to secure help from global nonprofit Save the Waves, clothing retailer Patagonia, and private donors in buying 3 hectares of land in Punta de Lobos to be preserved in a land trust. He wants his hometown to show Chile the way to preserve its coastline.

Now Navarro surfs the big waves of the world and uses his fame to attract attention to conservation. He makes contact with groups concerned about the health of oceans and coastal territories, as he did with Costas Verdes, which arranged for Navarro’s visit and the showing of the video. “Every beach has similar problems – over development, drought, pressure on resources, and so forth.”

Navarro’s father told the filmmakers, “He’s the guy who’s gonna roll up his sleeves, unify, and get this done.” But Navarro told the Guiones audience, “one person alone cannot do it. We all have to work together.”

Those of us who see a common thread joining Nosara’s challenges to Navarro’s quest will be following and encouraging him along his literal and metaphoric journeys.

The Fisherman’s Son: the Spirit of Ramon Navarro:

The Fisherman's Son: The Spirit of Ramon Navarro from Patagonia on Vimeo.