A Sustainable Jungle Gym for Grownups

A Sustainable Jungle Gym for Grownups

On your way to the beach through K section, you may see a sign just beyond Harbor Reef saying “Enchanted Forest.”

Curious, you follow a short path until you reach a gate with the same sign and a painted finger pointing to “Doorbell.”

Ring the doorbell and you’ll be greeted by Brenda Burnside, aka Brenda La Tigresa. In her enchanted forest she teaches a class she describes as “functional fitness” – popular with everyone from an Olympic kayaker (who joins the class for two weeks every high season), to yoga teachers who want to work out, to a rambunctious group of retirees, mostly women, who love to stay strong.

After a brief warmup with stretchy bands, the class goes through interval training that can include push-ups, pull-ups, sumo and suitcase lifts, kettle bell swings or squats, bicep and tricep extensions, balance, and resistance with exercise balls or wheels. All of this falls within the scope of functional fitness, defined as a method that builds core stability and trains muscles to work together by using various upper and lower body muscles at the same time and simulating movements common to daily life. 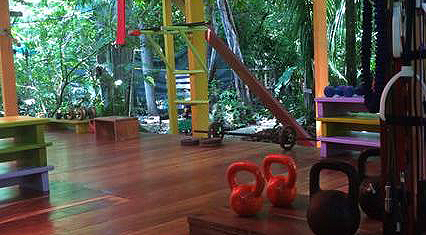 Then, with 15 minutes of class left, she is likely to say, “wrap your hands and put on the gloves” for a quick and intense cardioboxing workout. As students practice on a variety of punching bags, Brenda dons mitts and a chest protector and takes on one student at a time, calling out, “jab – cross – hook – cross – upper cut. Keep your boxing stance. Now try to catch me,” as she dances around the ring.

If you have wandered in without knowing her background, you will soon realize that she has the chops when it comes to boxing as well as fitness training. When she moved to Nosara in 2001, she left a successful career as a professional boxer, ranked second in the world for super flyweight 115 lbs class by the Women’s International Boxing Federation.

Brenda began training for the ring in her native Albuquerque, then moved to Las Vegas to get better fights. Ultimately, she competed for the world title in Germany. On her return to the U.S., she was unable to get the title fights she wanted and after a vacation in Nosara she felt the jungle call her – as have so many of us.  So she moved here.

She emphasizes that she teaches fitness, not boxing per se. “If people want to learn the sport of boxing, I’ll give them private lessons.”

Her students range in age from 5 to 75, and she preaches the gospel of exercise as a solution to most health problems. “It keeps you agile, and it keeps your body young. You eat more wisely and you feel better about yourself, so good-by to depression.” Brenda believes that  “overall fitness is the best way to a healthy body.”

She likes working with older people and points to many successes. For example, one 60-year-old was hunched over and moved painfully when she came to her first class. Now she stands tall and walks the beach briskly. She, in turn, recruited a friend whose scoliosis and problems with balance caused her to trip and fall frequently. After a few months of working with Brenda, her spine was flexible again, and she now rarely loses her footing.

“I teach fitness, not just to make you look good, but to help you stay healthy,” says Brenda, who can be heard telling her classes, “Work all your weaknesses until they become strengths.”

She also teaches basic athletic skills with children in the form of games and circuit training, drawing on over 30 years of experience teaching children’s sports and performing. Brenda states she will not teach kids to hit “until they are old enough to know when NOT to hit,” usually around 6 or 7 years. 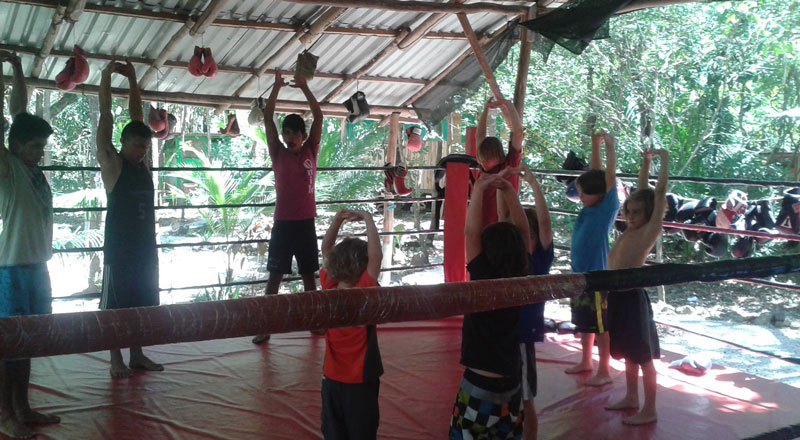 Brenda discovered Nosara in April 1999 when she came along to help a friend lead a fishing tour.

“We fished, kayaked, hiked, swam. And then near the end of the trip we saw the turtles nesting. That arribada was estimated at 50,000 turtles. A turtle appeared in my dreams that night, surrounded by every animal I’d seen on our trip. They were telling me that I was needed here.”

When she woke up, she had a strong urge to stay. “I went down to Harbor Reef for coffee. I asked Randy Bombard if he knew of any property for sale, and at 6 a.m. he walked me over here.” Brenda purchased the property shortly thereafter.

“It’s surrounded by parkland. A stream runs next to it. The ocean is a short walk away. That did it for me.”

Two years later, she moved here for good, and worked diligently to build an air-conditioned room for her elderly, ailing father. Life in Nosara improved his health and his spirits, and he lived for eight more years.

“I built the place so I could take care of him. I promised him I’d keep him out of a nursing home — his biggest fear.”

She put up little huts of recycled material for them to sleep in and a gym as a way of supporting herself. Having studied athletic training in college, she had trained semi-pro athletes and also studied with Raymond Kurshals, the only master Pilates teacher  to have studied with the disciples of Joseph Pilates himself.

“I was going to open a Pilates studio, but I couldn’t afford to bring my Pilates Reformer to Costa Rica. In 2001, there weren’t any in the country. So I sold my reformer and bought stretchy bands instead.”

She is proud of the small footprint of her home and gym. “I cut as few trees as possible when building my camp. Instead of a big facility, I built huts where people can sleep. I have composting toilets. I separate trash and I recycle. When family and friends stay here, we’ll throw out one small garbage bag every two weeks.” 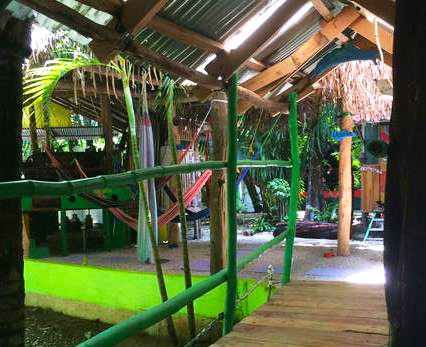 In class, she shares tales of the creatures she sees: armadillos, anteaters, possum, iguanas, and of course monkeys. A quartet of magpies line up for treats on a branch outside the kitchen.

“Last night I came out of the shower to see what looked like a cat up in the tree. I saw these huge eyes and a tail that didn’t belong to a cat. It was a kinkajou. If I didn’t have three dogs I’d see even more wild animals. It’s like living in a zoo sometimes.”

A long-time member of NCA, she says, “It has been nice knowing the NCA has always been here to guide me, answering those ‘jungle questions’ that arise. Special thanks to Bobbi Johnson for all you have done for me and for Guiones beach!”

As happy as she is to be living sustainably in the jungle, she’s even more enthusiastic about helping people sustain themselves throughout their lives with exercise.