Who Is the New President of the Nosara Civic Association?

Who Is the New President of the Nosara Civic Association?

Starting in April, the Nosara Civic Association  will have a new Board of Directors to lead the organization. The new board was elected at the Annual  General Assembly held on March 2nd.

Due to the restrictions caused by the Covid-19 pandemic, the Annual General Assembly was held virtually via Zoom. Attendees were able to vote on all motions and to elect the new board. 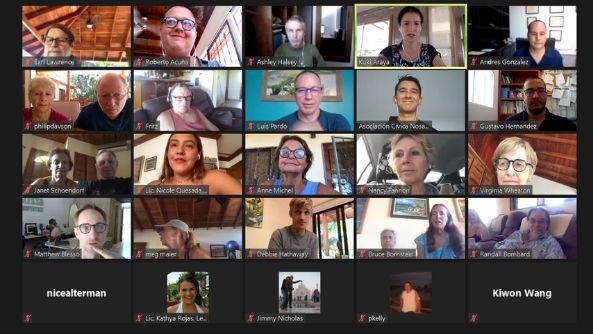 After four years of remarkable work by current president Ethel (Kuki) Araya, the new president will be Luis Pardo. Luis  has served as manager of the Hotel Olas Verdes and also heads the Nosara Chamber of Tourism.

The rest of the new board will be: Vice President – Kuki Araya, Treasurer – Nice Alterman, Secretary – Keri Dawn Solner. Fritz Elmendorf will be vocal 3, and Andres Gonzalez will continue on as fiscal. Two new faces were added to the board – Bart de Graaf, a local developer, will be vocal 1 and Nicole Quesada, a Costa Rican lawyer, will be vocal 2.

The new Board of Directors will take office on April 1st, after the minutes have been updated in the Civil Registry of Costa Rica. Their term will be for a period of two years.

During the annual meeting, the members of the association thanked the outgoing directors for their dedicated service: Gustavo Hernández who served as treasurer and Anne Michel, who served as a vocal.

At the meeting the directors presented the work report in which they highlighted the main achievements of the five programs of the organization: mobility, biodiversity conservation, scientific research, citizen empowerment and government support.

Some of the achievements – the closure of the garbage dump, the support for approval of the construction regulations and for the creation of the General Management Plan for the Ostional Wildlife Refuge – were highlighted.

If you wish to read the full report presented by the board, you can do so through this link.